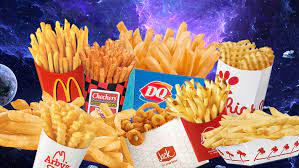 French Fry Frenzy: The Quest for the Ultimate Fry

The humble french fry. Timeless and delicious. The perfect accouterment to any fast-food feast. But in today’s highly concentrated fry climate, it can seem somewhat overwhelming to choose amongst the dense variety without the constant, gnawing doubt that you may be missing out on an even better fry experience. But despair not, for this guide shall serve as your devoted fry sherpa, to lead you up the treacherous slopes of fry Everest, without whom you would inevitably perish and forever adorn the mountainside with your frozen corpse, until you emerge triumphant upon the summit with the newfound knowledge of the one fry to rule them all.