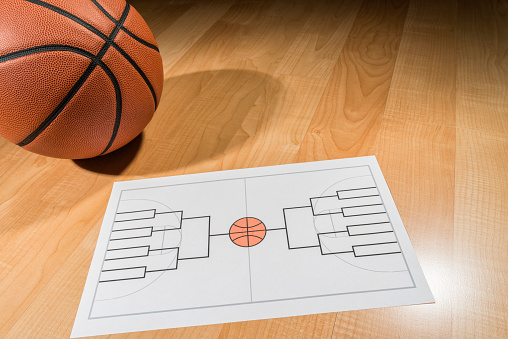 The best week in sports has finally arrived, and it is now time to do what 70 million other Americans do every year but never completely correct. From Selection Sunday until the first round begins on Thursday sports fans across the country are able to make their own predictions and no one will be able to disagree with them, because in reality, none of us really know.

There is a very high possibility that ESPN’s College Basketball analysts finish with a worse bracket than your grandmother who picked her bracket based on which mascot would win in a fight. However, to some contrary belief, there is a method to the madness. Before I start on my own predictions, here are some keys to filling out your bracket if you are new.

If you would like to compete in the Journalism bracket group, here is the link: Journalism Bracket Group

Tip #1: Put at least 2 top eight teams (one or two seeds) in your final four.

Tip #3: Pick at least one double-digit seed to reach the Sweet 16.

If there is any game you should feel confident about in your bracket, it should be this one. Do not ruin your bracket by picking against Gonzaga here. Expect Gonzaga to win in a rout.

The 8 vs, 9 game is always among the most difficult to pick. Memphis was a preseason top 10 team in the country before falling all the way down to a 9 seed. Boise State is coming off of a Mountain West conference title and will be playing in front of a huge home crowd in Portland. I like the Broncos in this one.

Although this will be a very common upset pick, I like the Huskies to move on to the second round, even after a Big East tournament loss to Villanova.

I see this as one of the most interesting matchups of the Round of 64. Arkansas got its marquee win defeating then #1 Auburn, and the Catamounts just drove right through the America East conference on its way to March Madness. Arkansas will advance, but narrowly.

In the first four, Rutgers will take on Notre Dame who really should not have made the tournament over Texas A&M. I will take Rutgers to beat Notre Dame in the First Four matchup and then also to defeat Alabama in the Round of 64.

Texas Tech is very experienced in the NCAA Tournament and is one of the best defensive teams in the country in scoring defense. The Red Raiders will be a difficult matchup for multiple teams, including Montana State.

Davidson received an at-large bid after losing to Richmond in the Atlantic 10 Final, which dropped their seed a lot. The Wildcats shoot it very well, but will not be able to handle the physicality of the Michigan State Spartans.

Once again, Gonzaga will dominate their opponent in the Broncos as they will have no match for Timme and Holmgren down low. Take the Zags to run away with this one.

After a narrow victory over Vermont, Arkansas is able to defeat UConn to advance to the sweet 16. The Razorbacks are battle-tested as they played a very difficult schedule this season.

The Scarlet Knights are led by one of the nation’s best players in Ron Harper Jr., but Texas Tech’s swarming defense will be overwhelming to Harper and will be essentially taken out of the game. Take the Red Raiders to advance to the Sweet 16.

In Coach K’s final season, he is once again matched up with fellow Hall Of Fame coach Tom Izzo. In their last NCAA tournament matchup, Izzo and the Spartans sent Zion Williamson home in the elite 8. However, this time the Spartans end Duke’s title hopes again and send Coach K home for the final time in a Spartan upset win.

In the Bulldogs’ first difficult matchup of the tournament, Arkansas provides them with some challenges early in the game. But, Gonzaga proves to be too much for the Razorbacks as they advance to the Elite 8 again.

Fresh off of an upset over the Duke Blue Devils, the Spartans are able to continue their upset run over a very good Texas Tech team with lots of experience.

Here is where the Spartans’ cinderella run will finally come to an end. Michigan State will not be able to defend the Bulldogs’ size.

This is also a no-brainer. Take the Bears to advance to the Round of 32.

North Carolina suffered a surprising loss to eventual champion Virginia Tech in the ACC Tournament. Playing through All-ACC First Team center Armando Bacot and star forward Brady Manek, the Tar Heels will advance to the second round for a date with Baylor.

Indiana barely snuck into the tournament as one of the last teams in after a great performance in the Big 10 Tournament. However, the WCC runner-up Saint Mary’s will defeat Indiana in the round of 64.

After a Final Four run last year, the Bruins are poised to make another deep run in the tournament. They will quickly beat Akron in the first round.

The Hokies made a surprising run in Brooklyn to receive an auto-bid into the NCAA Tournament. However, I think the Hokies have run out of magic and will shoot very poorly in a loss to Texas.

Purdue is one of the best offensive teams in the country and will dominate Yale easily in the round. Not a game to pick an upset.

The Racers went 30-2 this season and will continue their dominance into the first round against San Francisco.

Kentucky is one of the best teams in the country and will dominate their early opponents.

Here is one of my biggest upset picks in the entire tournament. I believe North Carolina will defeat the highest seed in the region in a shocking turn of events. The Bears will not be able to defend Bacot down low and will go home early.

The Gaels of St. Mary will be demolished at the hands of UCLA in the Round of 32. UCLA will match up with North Carolina in the Sweet 16.

Purdue will once again use their great shooting to advance to the Sweet 16 in a shootout against Texas.

Kentucky will once again roll through their matchup ending Murray State’s run in the Round of 32.

After a huge upset against Baylor, UNC will come out flat against the Bruins who will defeat the Tar Heels to advance to the Sweet 16.

Kentucky will prove to be too good defensively for Purdue to get anything going on the offensive side of the ball.

In one of the best games of the tournament, Kentucky and UCLA battle it out for a trip to New Orleans. Kentucky once again prevails in overtime and sends UCLA home.

Another easy pick here. Don’t pick a number one seed to lose in the first round.

Although the Pirates have played better than TCU this season, I like the Horned Frogs to make a 9 over 8 upset. TCU is one of the best rebounding teams in the country and will beat Seton Hall on the boards.

In one of the most interesting matchups of the Round of 64, Houston’s elite defense matches up with one of the best three-point shooting teams in the field in UAB. The offense always outdoes defense in March. Give me the Blazers in an upset.

Another popular upset pick here, but Illinois will easily despatch the Mocs in the first round.

The Wolverines barely snuck into the tournament despite losing 14 games this season. The Wolverines’ experience against ranked teams will get the win against Colorado State.

The Volunteers are very under seeded in this tournament and are poised to make a run to the Final Four. Take Tennesee in this one.

Never bet against Sister Jean in March. Take the Ramblers to beat the Buckeyes in Round 1.

The Wildcats shoot at an elite level and will easily advance past the Blue Hens.

Led by Bennedict Mathurin, Arizona’s offense will score enough to outdo a good defensive and rebounding team in TCU.

Unfortunately, UAB’s run will come to an end against Kofi Cockburn and the Fighting Illini.

Even after an upset in the first round, Michigan will not be able to guard Tennessee on the perimeter.

As much as I want to advance the Ramblers into the next round, Villanova will beat Loyola Chicago to advance to the Sweet 16.

Arizona offensively is too much for Illinois and the Wildcats will defeat the Illini to have a chance to go to their first Final Four since 2001.

After barely getting past Loyola Chicago, Villanova will come out flat and go home early in the Sweet 16.

Here is where Arizona’s run will finally come to an end. Tennessee will advance to their first-ever Final Four.

Player of the Year Candidate Ochai Agbaji will lead the Jayhawks to an easy win over Texas Southern.

San Diego State is the second-best defensive team in the country behind Houston. The Aztecs will be able to advance to the second round against Creighton, a team that scored 48 points in their last game.

The Hawkeyes are led by First Team All American Keagen Murray and will easily roll past the Spiders in the first round.

Providence is known for its great big man play and interior defense. But, South Dakota State shoots nearly 46% percent from beyond the arc. The Friars will not be able to keep up with the three-point shooting of SDSU. Give me the Jackrabbits.

The Tigers just parted ways with their head coach, so I will take the Cyclones in a not-so upset.

Toothpaste jokes aside, I think Colgate actually has a chance to upset Wisconsin in this matchup. However, there doesn’t seem to be enough upside as Wisconsin could likely make a run. I’ll take the badgers in a close one

Miami has lots of great wing shooters led by Kameron McGusty who will lead them to a first-round win over the Trojans.

Auburn will easily win this matchup and advance to the next round.

This is perhaps Kansas’ most difficult game on their road to the Final Four. The Aztecs’ swarming defense will challenge Kansas and force them to hit big shots down the stretch. Kansas escapes with a close win.

Did somebody say Cinderella? The South Dakota State Jackrabbits are the underdog of this year’s tournament and advance to the Sweet 16 over Iowa.

I think the Cyclones will compete with Wisconsin all the way through but the Badgers will pull away at the end for a twelve-point victory.

Auburn’s size will be too much for Miami’s post players as Auburn gets an easy win against Miami.

Unfortunately for all basketball fans, Kansas will take out the Jackrabbits after a great run through the first two games.

Auburn will continue their run with a narrow victory over Wisconsin.

Auburn builds an early lead and even leads with less than five minutes to play. But Auburn can’t hit their free throws much like their last deep tournament run in 2019. Kansas escapes once again.

Although Gonzaga was the #1 overall seed in the tournament, they go home from the Final Four empty-handed once again as the Wildcats advance to the National Championship

In a great matchup, Kansas’ depth is a bit much for the Volunteers, and the Jayhawks advance to play Kentucky in a matchup of Blue Blood programs.

The tournament ends with the Kentucky Wildcats cutting down the nets for the first time since 2012.

Thanks for reading through my March Madness predictions, especially if you read through all 2937 words. Hopefully, it will help you win all of your bracket pools, enjoy the tournament and pick upsets, it’s not fun if you don’t.