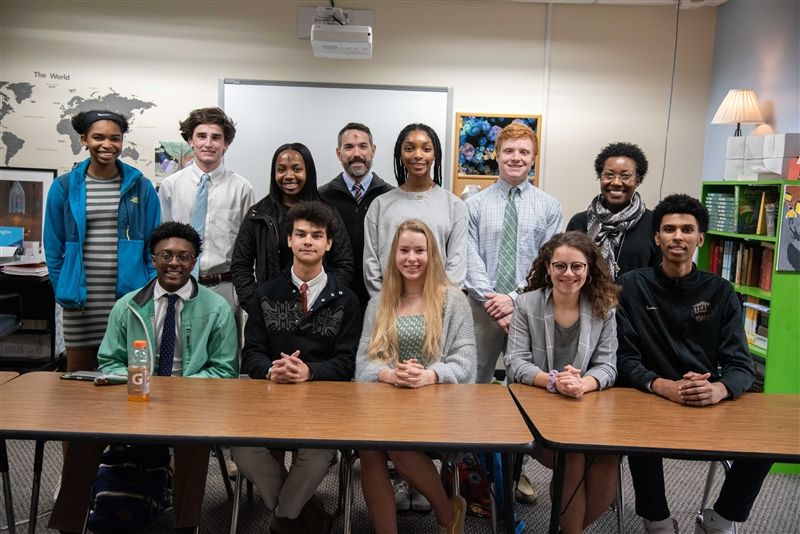 A Tribute to Ms. Gordon

Ms. Gordon, Religion & Ethics teacher and Diversity and Inclusion Director, has recently announced that she is leaving Christ Church after three years of service. She had lots of roles in the school community and will be missed by many people.

Mrs. Weldie says that “She is one of the most genuinely caring people I have ever met and I am truly fortunate to call her a friend.” Ms. Gordon was able to create close relationships with many faculty members and students in her short tenure here, making the best of her time.

“Her walking to the classroom everyday and saying ‘Hello my little Theologians’ was my favorite moment,” said Michaela Bowman.

Before coming to Christ Church, Ms. Gordon worked for the General Board of Discipleship of the United Methodist Church for 10 years. She said her role “included training pastors in children’s ministries, supporting churches in lowering the risk of child abuse, and developing resources for churches across the country.”

The inspiration to teach is something that has been passed down for generations in Ms. Gordon’s family. Her parents were both educators, as well as many members of her extended family. She says those family members “laid the foundation for the power of education to transform people and communities.”

When we asked Ms. Gordon about her favorite memory from Christ Church, she is sure “that many teachers believe that their Advisory Group is the best. I know that my group is special. We somehow managed to make memories every week through deep conversations, games, and openness to learning from one another.”

Mrs. Ferguson, one of Ms. Gordon’s closest friends, describes her as “creative, witty, and intelligent.” The two met in sixth grade and became friends “out of a common bond of not fitting into certain middle school cliques.”

Mrs. Ferguson’s favorite memory of Ms. Gordon at Christ Church was “Seeing how much the students love her and admire her.  I knew she would make an impact here, and I relished the idea of us getting to work together.  She quietly pushes students to develop foundations in their beliefs and she lives what she teaches.”

“I will continue working on plans that will allow me to support young people in cultivating their gifts and talents to faithfully respond to the needs, concerns, and hopes of the world,” said Ms. Gordon.