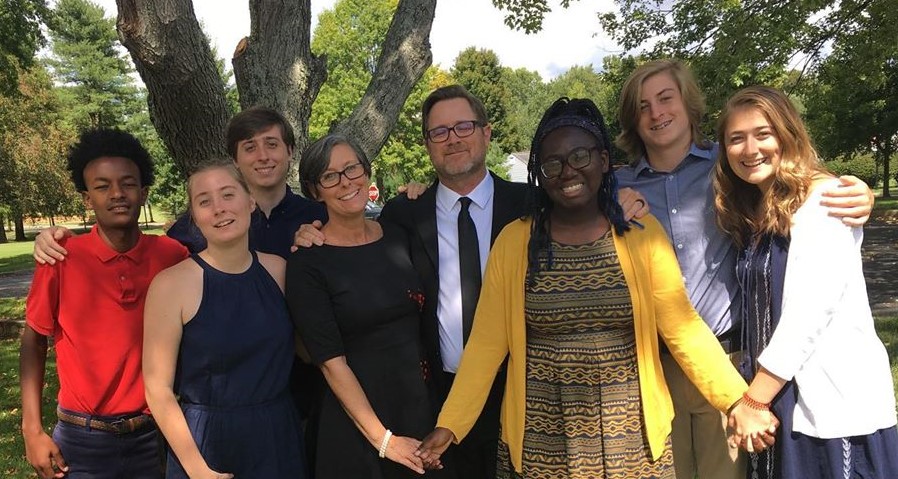 Throughout everyone’s school career, there is always at least one teacher who stands out, whether it was their story, the role they played at the school, or even the impact they had on the students’ lives. For many at Christ Church, that teacher is Mrs. Traci Welide. Starting in 2013, this is Mrs. Weldie’s seventh year at Christ Church, teaching in the directed studies and working with the achievement center, being able to reach students across the campus.

Growing up outside Columbus, Ohio, she remembers being very connected to her town’s church and growing a strong connection with her faith, which carried over and largely influenced her adult life. One vivid memory she has is reading National Geographic Magazines and seeing children in Africa and the impoverished life they lived and feeling the need to help the lives of others, and began forming the idea of adopting a child from another country. Going to college at Miami University in Ohio, the same university as her future husband, they would not meet until she was graduated and would soon after start their family.

Having four children of her own now spanning the ages of  23 to 14, it was not until her oldest was ten and her youngest was three that her family finally made the move to adopt. Reflecting on the moments leading up to the decision, she attributes a lot of her decision-making to the study of the book of James, in which it talks about caring for the widowed and the fatherless. With this strong spiritual calling to pursue adoption, in August of 2008 they agreed upon adopting from an African country. It was not until April of 2009 that they were at the airport to bring home their son from Ethiopia. In 2011, the Weldie family adopted their second child, this time from Ghana. Describing the emotionally-stirring story of the child going from her  home in Africa to her first adoptive home in the States, only to be put up on Craigslist, is a true testament to the need of loving homes. Working through child protective services, Mrs. Weldie and her family were able to gain custody and adopt her and she was taken out of the original adoptive home.

Through all the changes and transitions she and her family have experienced, she says her faith in God as brought them out from the roughest places.

Of course, after adopting two children and fostering five, she is now very familiar with the process. When taking in children, she focuses the most on creating a loving and nurturing environment where the kids who may have history with parental or drug abuse can finally feel safe. Right now in the state of South Carolina, there are over 400 kids in need of foster parents staying in what is basically an orphanage. She believes the brokenness of the stories is the main reason more people don’t look at fostering or adopting.

How does this influence the students she teaches? She says what she strives for most is to make sure each student feels important and that they matter. She feels the way school is structured makes college seem like a necessity, and although she acknowledges the importance of a degree, believes that too much emphasis is put on the number on a report card. It is the care and love she displays at home and in the classroom that make teachers like Mrs. Weldie stand out in our Christ Church community.