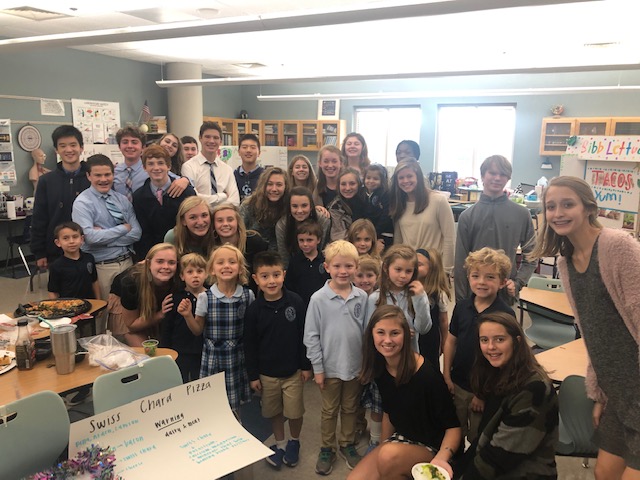 Every year the 9th-grade Honors Biology classes prepare plant-based food dishes as part of their tower garden project. This year’s choices included Swiss chard, arugula, kale, gourmet lettuce, Collard Greens, bibb lettuce and pak choi. Fellow students and teachers were able to sample the food. The reactions were mostly positive, but, in my opinion, one class outperformed the other.

I started off with W period. The faculty voted the gourmet lettuce wraps stuffed with beef as the tastiest item.  I agree. These wraps were so well-liked that many teachers and some students even asked for the recipe. Another popular dish was the burrito bowls with gourmet lettuce. Tasters could add cheese, rice, beans, and chicken to their bowls – like having Chipotle. Perhaps the most intriguing thing that happened in this class was the rivalry that formed between two similar groups. The collared greens group and the kale group both made pasta with their greens. Many students/teachers couldn’t distinguish between the two groups because their recipes were almost identical. But when it came time to choose which group had prepared better pasta, most voters chose the collared greens because they included bacon bits and “who doesn’t like bacon?”

I then moved on to 2nd period. Unfortunately, my first dish in this class disappointed me. It basically consisted of gourmet lettuce in a cup. It was flavorless and tasted like store-bought lettuce, an overall poor choice. Despite the one negative dish, most of the food in this class was absolutely remarkable. I wanted to have seconds and thirds from almost every group. In particular, I loved the pak choi pasta and the bibb lettuce wraps. Every bite I had of the pasta made me crave more. The pasta was soft, seasoned, and included some flavorful chicken. However, everyone had the same positive reaction as me, so there was only enough for me to have seconds of the pasta. The good news, though, was that I had 6 or 7 lettuce wraps. I couldn’t stop eating them. The wraps were filled with beef and I could choose my own toppings. I kept it simple with beef and cheese, but others added cilantro, sour cream, etc. Another dish that impressed me was the pizza with Swiss Chard on top. It was an extremely tasty homemade pizza. This class was a big success.

And the winner is….2nd period. The taste and abundance of good food in this class outweighed W period, which needs to step up its game if a similar competition presents itself later in the year.