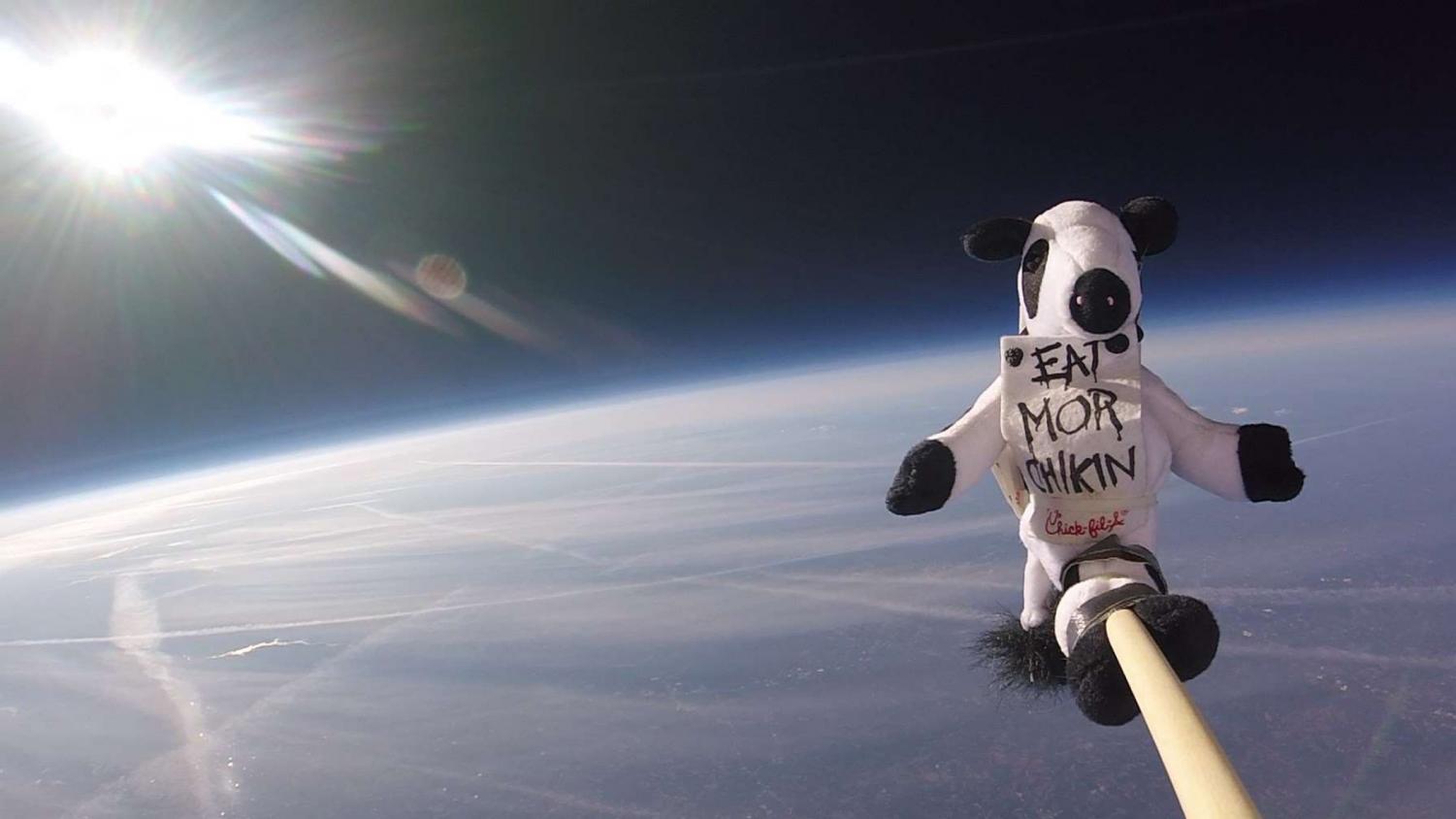 The Chick Fil A Cow reached altitudes of nearly 90,000 feet before landing in northern North Carolina

Cow Comet: The Kermit Crew is Back

If you were at CCES in April of 2018, you likely remember the story of the Kermit Comet. A couple of students from the class of 2022 did some crowd-funding so they could make enough money to send a weather balloon into space. The balloon launched into the air with a GoPro, a GPS, a Styrofoam cooler, a plush Kermit the Frog, and a Funyun. The combined package reached a maximum altitude of 90,000 feet in the air, so high that the sky began to lose color and the curvature of the Earth was clearly visible.  After it fell from the sky, it was found a few hours later in Laurahill, NC. The whole event was documented in a YouTube video uploaded by Liam Mecklenburg, which you can see here. The whole event was common talk in the school around the time, and it eventually picked up so much traction that it caught the attention of WSPA’s Your Carolina, and the students who helped launch it were brought onto the show. The event as a whole was a huge success, and the same people in charge are coming back for Round 2.

On November 2nd at the Chick-Fil-A on Laurens Rd, Liam Mecklenburg and crew launched the Cow Comet, the spiritual successor to the Kermit Comet. When asked about the origins of the idea for this event, Liam said, “We wanted to do it again because people had been asking us when and if we were doing a Part 2.” It was ultimately decided that they would launch it to give people another memorable event.

This event ended up bigger and better than the Kermit Comet. Likely the biggest upgrade from the original is the new launch location. According to Liam, the idea for the unofficial sponsorship started as a joke. However, the team “decided to give it a shot and call the Chick-Fil-A manager on Laurens Road. After a couple of emails and a meeting, we had a deal.” Appropriately, the weather balloon will be sporting a Chick-Fil-A cow plush toy, as well as Kermit.

In addition to the sponsorship, this event had a significant technical upgrade as well. This time, the balloon was equipped with two GoPros and a dedicated flight computer. Liam elaborated on why he and the organizers wanted to do this, saying that they “want to try some different things now that we know what to expect.”

When the day finally came, everything went according to plan. Normal Chick-Fil-A customers and CCES students interested in the project showed up and were delighted and entertained by what they saw. Once the launch party was over, the team knew that it was time to head out and start looking for the package. After a very long and tiring search, the pickup crew found and retrieved it in Louisburg, NC at precisely 11:56 AM the next day. The CFA Cow Balloon documentary is featured below. Be sure to check it out, and, in the wise words of the balloon launch team, Go Cavs.