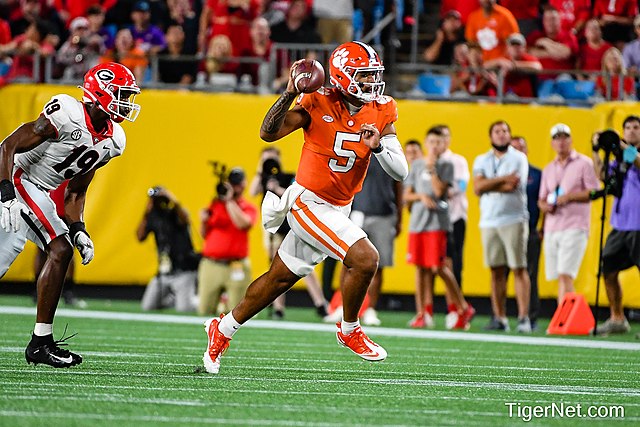 The Dabo Dynasty is Over

November 26th, 2022, was not a fun day to be a Clemson Tiger. Not only did the South Carolina Gamecocks waltz into Death Valley and upset the #8 Tigers, but they also broke the nation’s longest home winning streak (40 games) and ended their losing streak to Clemson (7 games). Clemson had a bad day, however, this loss to UofSC was a culmination of almost two years of inconsistency, stubbornness, and frustration. The Dabo Swinney dynasty is dead, and from here Clemson needs to do some serious soul-searching. The Gamecocks are once again ascending, and teams like Florida State, North Carolina, and Notre Dame could give the Tigers problems for the next few years. Here are the problems that have halted the once enthralling locomotive steamrolling opponents twelve Saturdays a year. Here is why the Clemson dynasty is dead.

A common criticism regarding the 2022 Clemson Tigers is the quarterback play of D.J. Uiagalelei. While D.J. isn’t a very good quarterback, it’s unfair to place all the blame on him for both the loss on Saturday and the offensive struggles as a whole. His play calling has been atrocious, as offensive coordinator Brandon Streeter has, pun intended, put together game plans that are offensive to watch. His gameplays are as predictable as somebody who runs the same five plays in Madden. Run up the middle with Will Shipley. Run up the middle with D.J. Call for a pass on third down that falls usually incomplete due to D.Js’s subpar accuracy and poor route running. The one bright spot, freshman receiver Antonio Williams, will, unfortunately, have his name etched into Palmetto Bowl history with his fumble on a punt return late in Clemson’s loss. However, Williams would have never been in that situation if Brandon Streeter kept calling runs for halfbacks Will Shipley and Phil Mafah. Clemson was getting three to five yards a pop, and with South Carolina pinning the Tigers consistently deep in their own territory on punts, Streeter could have run out the clock while kicking a field goal if he just ran the ball. Instead, Clemson panicked and tried to pass with D.J., who has no touch on the ball and is wildly inaccurate. To put into perspective how bad it was, Will Shipley, who finished with 132 rushing yards, only got a whopping two carries in the 4th quarter. The absence of logic and creativity in Streeter’s gameplans have left Tiger fans wondering how we can even manage to put up points semi-consistently. There is so much offensive coordinator talent all across the country in college football, but Tigers head coach Dabo Swinney is hell-bent on sticking with Streeter, and with Streeter comes D.J. It seems that the fans are seeing both the time of Streeter and D.J’s time at Clemson come to an end, which when the day comes will be celebrated and praised to a degree in which many Clemson fans are not ready for.

When Clemson was on top of the college football world and in the same dynasty talks as Alabama (which feels like centuries ago), they branded themselves as “Wide Receiver University”. This label, given to them by co-offensive coordinator Jeff Scott, was a deserved title. Sammy Watkins, DeAndre Hopkins, Mike Williams, Tee Higgins, Martavius Bryant, Hunter Renfrow, Ray-Ray McCloud, etc have all had NFL careers with varying success. Since then, Clemson’s receivers have completely dropped off the map in terms of national recognition and skill. Joseph Ngata, who showed promise as a freshman, is now a senior and is a complete bust. Justyn Ross, while dealing with an unfortunate neck injury, never really unlocked his full potential. Beaux Collins, D.J.’s former high school teammate, is either injured or dropping passes. E.J Williams, the less said the better. Now some of this can be blamed on poor quarterback play, as Williams, Ross, and Ngata all looked like future first-round picks with Trevor Lawrence as the starter, but even so, these guys have never developed past their high school hype.

The failure to develop players isn’t just on the receivers. D.J. Uiagalelei flashed moments of brilliance against Notre Dame and Boston College during his freshman season. However, rumors have swirled around the program that both family issues and meddling from both Streeter and Dabo Swinney have held his progress back significantly. The same can be said for multiple 5-star offensive linemen that the Tigers can’t seem to get on the field to help D.J. get comfortable in the pocket. Even the established stars, like Trenton Simpson and Miles Murphy (who might be a top-ten pick in this year’s draft), have disappeared for what seems like weeks now. Most of this is to blame on the coaches, in the case of the offense, it is OC Brandon Streeter and wide receivers coach Tyler Grisham. Grisham, a former player under Swinney, has been lambasted by fans for seemingly never getting receivers to their NFL-ready talent level. Speaking of former players on staff…

Now some of these guys are Clemson legends, mainly Boyd and Spiller. However, as great as they were on the field, do they know how to coach the game? For example, I love C.J. Spiller, he is arguably the most important player in Clemson program history, as he saved Dabo’s job multiple times. But should C.J. Spiller really be the running backs coach? Probably not, and it seems like Dabo just gave him that job more as a token of gratitude than as a strategy to have a better run game. Another example of this is Swinney’s Paw Journey program, which helps players learn life skills while working under the umbrella of the football program. On paper, it is genius. Not every player is going to the NFL, so why not teach them money management, job skills, etc. Well, let’s look at who runs the Paw Journey program. Some of the more notable names are: Rashard Hall, Artavius Scott (played under Swinney), and Jeff Davis, a former Clemson linebacker who had both sons, Judah and Jedidiah, play under Swinney. So if I am a backup graduating senior with no real shot at professional football, what is stopping me from just saying “let me hit up Coach Swinney for a job!”. The unfortunate aspect is that sentiment sort of undermines the entire point of Paw Journey. Now Paw Journey does a lot of good. It’s been instrumental in developing NIL deals for players. It has helped players from tough backgrounds find skills outside the game of football, helping them achieve success in life. Most D1 programs don’t have anything resembling Paw Journey. Dabo Swinney loves to present a “family culture” to the program, and while it was a winning one before NIL and the transfer portal, the new age of college football emphasizes playing time and money before it emphasizes being a part of a 4-5 year family.

Last season, Alabama’s top wide receiver target, Jameson Williams, was a transfer from Ohio State. Their best linebacker was Henry TouTou, a transfer from Tennessee. Ohio State wiped the floor with Clemson in the Sugar Bowl in Trevor Lawrence’s final game. Who was their quarterback? Georgia transfer Justin Fields. In fairness to Dabo, the guys who have transferred from Clemson haven’t really been anything special. The best might be Joseph Charleston, who is currently a starting linebacker at Missouri. Still, the new way to win in college football is the NIL and transfer portal. Even though Texas A&M has struggled this season, they still have a better jumpstart on NIL than almost any other team in the country. Southern California might make the College Football Playoff, and their best offensive weapons are Caleb Williams (who might win the Heisman) and Jordan Addison, both transfers who got sweet NIL deals in SoCal. Even the guy who destroyed Clemson’s secondary all Saturday long, Spencer Rattler, was a cast off from Oklahoma. Yet it seems at times Swinney is either stubborn or doesn’t care/bother to change. It’s disheartening as a fan to see this week in and week out and the past couple offseasons failing to bring in big-name guys to a program Swinney has worked so hard to return the prestige of.

I know it is a lot to process, but the sinking of the Titanic known as the Clemson Tigers football program is already in progress. Some may say the dynasty died the night Justin Fields dissected Clemson’s secondary in the Sugar Bowl, some say it was the Notre Dame loss only a few weeks ago. However, the culmination of everything mentioned above could not have been on better display Saturday in Death Valley. Clemson coaches, players, and fans must change the attitude and culture before they find themselves back in the pre-Dabo Swinney dark ages. They also need to contend with the seemingly ascending Gamecocks. Unfortunately, little brother hit a growth spurt the last two weeks, and the Gamecocks could very well finish with a nine-win season in coach Shane Beamer’s second season. The Gamecocks are edging closer and closer to Steve Spurrier-level success much to the chagrin of the Clemson faithful. The Gamecocks are stockpiling talent both in the portal and through recruiting and next year they could seriously light up Clemson’s world in Columbia. Until then, congratulations little brother, sometimes you win too. For the Clemson fans out there, though the dynasty may be coming to an end, let us consider everything Swinney and Co. accomplished. In the 7 years Carolina didn’t beat Clemson, Clemson won two national championships, went to four national title games, won six ACC championships (with a seventh probably on the way), won 10 games every year, won almost as many bowl games (8) as USC has won in program history (10), had twelve players get selected in the first round of the NFL draft, and did that all under one coach while USC had four in the same time span. Safe to say, it was a pretty nice run.