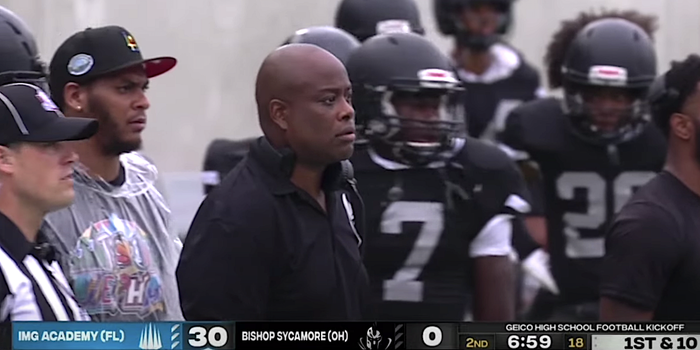 How a Fake High School Played a Football Game on ESPN

On August 29, ESPN aired a high-school football game between powerhouse IMG Academy and Ohio-based Bishop Sycamore. The problem, however, was that the latter not only lied about the number of Division I recruits they had, failed to give ESPN a roster, but also may not even exist.

IMG dominated the matchup, winning 58-0. During the second quarter, the announcers began to express concern for player safety and even questioned Bishop Sycamore’s legitimacy. They had a point, as following the game, it was discovered that the school’s address was a recreation center in Columbus, their website was bare bones (it now says it’s under maintenance), their coach, who has since been fired, had an active arrest warrant from the state of Ohio for failing to pay a hotel over $100,000 to house players, and their team was filled with primarily 20-something year-old college dropouts.

Supposedly, Bishop Sycamore is an online-only charter school founded by Andre Peterson, who also serves as the football team’s offensive line coach. Peterson claims the school is not a scam, saying, “If it’s a scam and the kids are not going to school and not doing what they’re supposed to do, then I’m literally scamming myself.” The Ohio Department of Education did not list Bishop Sycamore as a charter school for the 2021-22 school year.

So how exactly did a program with numerous red flags participate in a nationally-aired football game? ESPN partners with a company called Paragon Marketing Group to air high-school football games. ESPN blamed Paragon, who released a statement to Yahoo Sports saying “We regret that this happened and have discussed it with Paragon, which secured the matchup and handles the majority of our high school event scheduling. They have [assured] us that they will take steps to prevent this kind of situation from happening moving forward.“