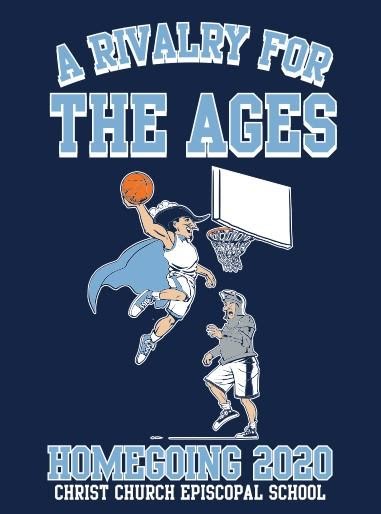 Christ Church vs St. Joe’s: The Most Heated Rivalry in Upstate SC

Despite being two relatively small private schools, Christ Church and St. Joseph’s have an extremely fierce rivalry that extends through all sports. This is shown through: chants at football and basketball games, on court celebrations at basketball games, confrontations in the Cookout parking lot, and a general dislike for each other. There is always a buildup at each school the week of a big matchup between two teams. Former CCES basketball star Jeb Helmers said he remembers having trouble focusing on any school work the day of the St. Joe’s game because of the buzz around the school.

While there is plenty of passion from each fanbase, some of the matchups have actually been relatively lopsided. The Cavs hold a 10-2 advantage over the Knights in football, 14-8 in boy’s basketball, 16-7 in girl’s basketball, and 4-0 in boy’s lacrosse. CCES has also had significant success over St. Joe’s in boy’s and girl’s tennis, boy’s golf, and girl’s soccer. Meanwhile, the Knights hold an 11-2 advantage in baseball, 19-0 in volleyball, and 12-1 in boy’s soccer. The Knights have also been dominant in cross country through the past few years. This lopsidedness has helped fuel the rivalry. No one wants to be known as the “little brother”, and this creates a passion in each fanbase to get rid of this narrative. Obviously, this passion continues to the players, as Jeb Helmers said that their two main goals going into the year were to win state and sweep St. Joe’s.

Perhaps one of the best people to comment on the rivalry is RJ Beach. Beach served as the CCES athletic director for twenty one years. During his time at Christ Church, Beach led the golf team to ninne state championships and the basketball team to seven region championships. However, in 2015, he flipped sides when he was hired to be the athletic director at St. Joe’s where he served for two years. Beach said the rivalry didn’t really ramp up until the 2010-11 season when St. Joseph’s joined the South Carolina High School League. Ultimately, this led to CCES competing with St. Joe’s for region and state titles. Christ Church was dominant early in the rivalry, but St. Joe’s has been able to inch closer ever since the hiring of head coach Paul Assinesi. Coach Beach credits this hiring to the jumpstart of the St. Joe’s basketball program. Beach said that there is a lot of excitement from both sides, and the gym is the loudest that he has ever heard at a high school game. Coach Beach is not the only one to have seen the rivalry from both sides. Christ Church senior Peter Baer spent his first year and a half of high school at St. Joe’s before transferring to CCES halfway through his sophomore year. Baer said that both schools have a lot of passion for the rivalry, but CCES has more of a whole-school approach while St. Joe’s was more student driven.

This dominant start by Christ Church followed by St. Joe’s beginning to even the series out does not only apply to basketball. For example, in football, the Cavs won the first ten matchups (none of which were close games until the tenth). However, the Knights have won the last two matchups rather handily. As Coach RJ Beach said, St. Joe’s did not make the switch from SCISA to the SCHSL in 2010. Furthermore, they did not even become a school until 1993 while Christ Church has been a school for over sixty years. This late start and delayed jump to the SCHSL explains Christ Church’s early dominance in the rivalry. Furthermore, it explains the passion from the St. Joseph’s fanbase. They were viewed as the “little brother”, and they wanted to defeat this narrative. As for Christ Church, they wanted to keep the “big brother” narrative and do not like to see St. Joe’s start to catch up to them.

During my time at CCES, I have noticed that the rivalry has grown significantly recently, and it will only continue to do so. This rivalry is good for the schools, as both of them have been able to raise a significant amount of money during their spirit weeks. If both schools can continue to compete in a clean, good-spirited manner, this rivalry will be a great one for years to come.