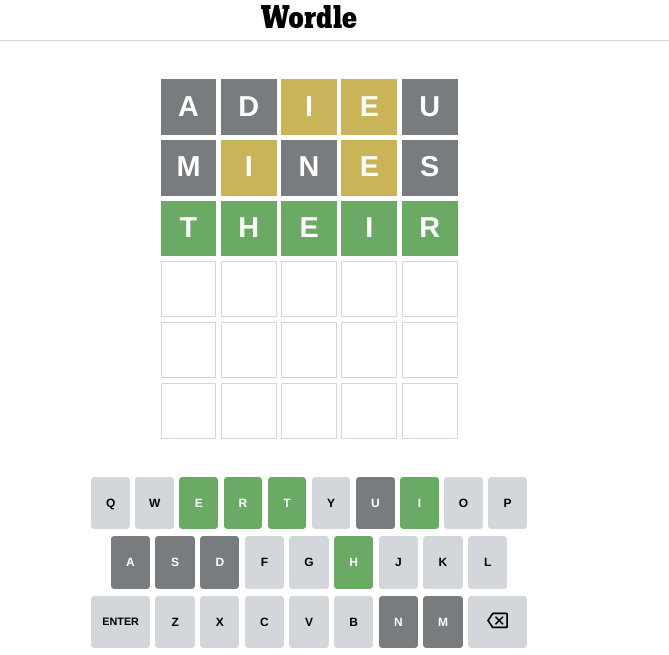 Over the past few months, internet users have become obsessed with the hit game, Wordle. The game is fairly simple, giving the user six attempts to guess a five-letter word. Letters will appear gray if not listed in the word, yellow if listed but not in the right position, or green if listed in the correct spot, with a new word daily. Due to its simple premise and competitive nature, being able to share and compare your results amongst your friends and family, Wordle has gained immense popularity.

Josh Wardle, a Welsh software engineer, created the game in October 2021. Wardle originally intended for Wordle, a pun on his surname, to solely be used by him and his partner, Palak Shah. However, his relatives loved the game so much that Wardle decided to make it a public, free-to-play online game. Wordle started to gain a cult following on Twitter, with users tweeting out their results daily. As of March 2022, seemingly everyone is playing the daily word game. Within weeks, the game had seeped into the daily routine of millions.

The New York Times bought Wordle in February 2022 for, according to Wardle, a dollar amount ‘in the low seven-figures.’ Following the purchase, many fans expressed concern over whether or not a paywall would be added to the game. Since then, the game has remained free, with the New York Times intending to keep it free for all players. However, fears remain that the game will eventually be pay-to-play.

With all this being said, what exactly is Wordle’s future? Its immense popularity has led to dozens of Wordle-themed variations, including Heardle (a daily music game) and Globle (a daily geography game. This could all lead to a Wordle burnout. Wordle is at a crucial point in its lifetime where it will either become a long-lasting part of people’s lives or just another fad. Based on previous games and gadgets (think the fidget spinner), history suggests that it will become the latter.