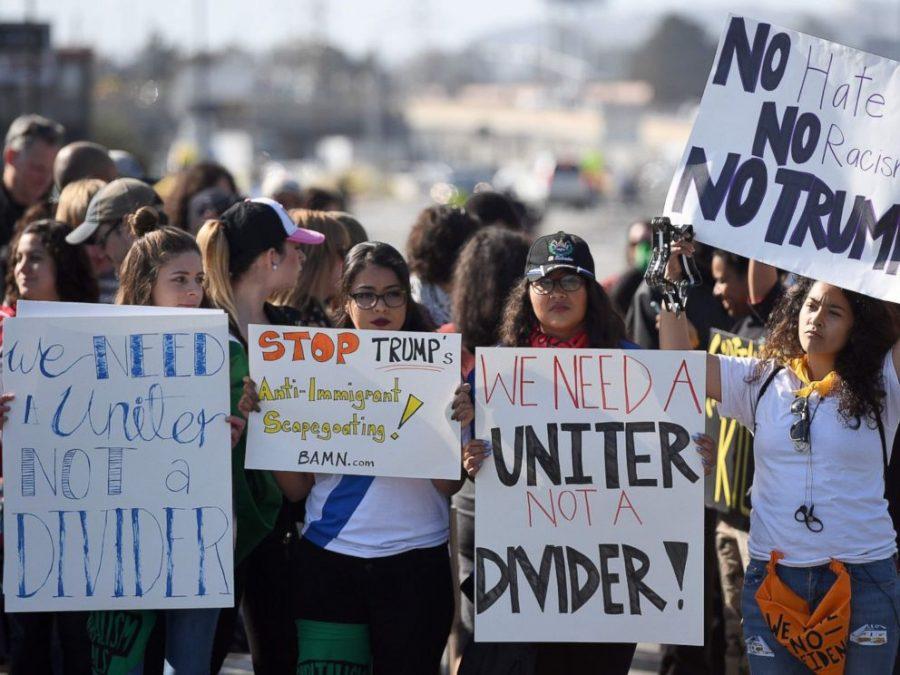 Protesters have expressed sentiments against President-Elect Trump's policies and behavior across the country (http://a.abcnews.com/images/Politics/GTY_trump_protest_california_as_03_160429_4x3_992.jpg).

Americans crawled out of bed on the crisp morning of November 9th and made a hot cup of coffee in an attempt to mask the dark circles under their eyes that lingered after a long election night. Some were ecstatic to see our new president while others were left with the sinking feeling that there are dark days ahead for America. A few seemingly quiet days went by, but some Americans were rallying behind closed doors.

Anti-Trump protesters have been in full force in recent days to show their discontent with the president-elect. These protests have been conducted in major cities around the United States, especially in New York. Over 500 protesters gathered in New York City to establish their unity against the Trump administration. These people disagree in Trump’s stance on immigration and are offended by his previous statements on women and minority groups. Trump supporters responded to these sometimes violent protests, leaving some physically injured. Protesters in Portland, Oregon have damaged property and destroyed several local businesses. Hundreds have been arrested so far, but the masses of people have overwhelmed authorities across the country. Businesses have even rejected Trump further widening the divisions in the U.S. The CEO of GrubHub, a large online grocery company, has announced that any employees who support Trump are not welcome. He said, “I absolutely reject the nationalist, anti-immigrant and hateful politics of Donald Trump and will work to shield our community from this movement as best as I can.”

On the other hand, some companies have received backlash for their support of Trump. People have started to burn their New Balance shoes to make a statement that they will not support any company that supports Trump. Starbucks has made their anti-Trump stance clear and has sparked outrage among Trump supporters. People have started to request the name Trump on their Starbucks cup to show support for the president-elect. If the Starbucks employee refuses to write Trump’s name, then customers film the experience and share it on social media in an attempt to spread awareness.

America was built on freedom of speech and the expression of different ideas, but these protests have only shown hatred and division. However, there are Americans who have accepted the results and chose to move forward with a more positive outlook for the future of America. In our own Christ Church community, everyone has different opinions on politics. We still stand as a united group and accept each other’s differences to create a tolerant and successful environment to learn and cultivate friendships. If America would have the same outlook, we might be a peaceful, happier, and successful nation.