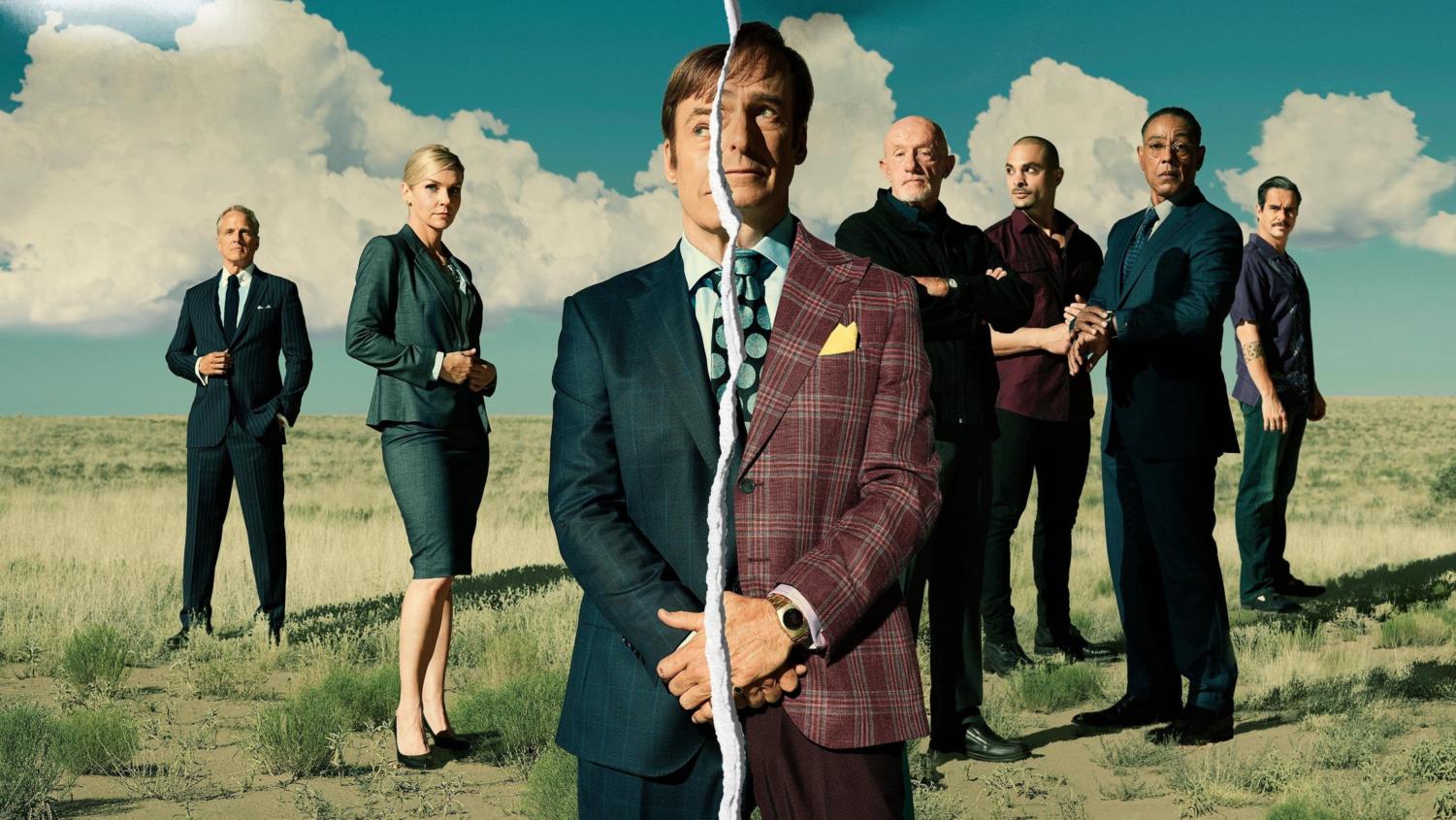 When Breaking Bad first opened with a shot of the New Mexican desert and a middle-aged man driving an RV in his underpants, you might have been forgiven for not believing the show would become one of the most popular pieces of media of the 21st century. In spite of this, show creator Vince Gilligan was able to craft a series equal-parts thrilling, dramatic, and tragic, with a hint of comedy sprinkled throughout the show’s duration. Following the series’s conclusion in 2013, a spin-off centering around Walter and Jesse’s lawyer, Saul Goodman, was announced. Titled Better Call Saul, the show would explore the history of Saul (known as Jimmy McGill in his early years) and his transformation from an honest, but unsuccessful, lawyer into the consigliere of Walter White’s methamphetamine organization. A Saul-led spin-off was unexpected by Breaking Bad fans, but Better Call Saul garnered acclaim and success to rival its predecessor. The show’s sixth and final season, airing summer 2022, was highly anticipated. Better Call Saul’s concluding season and series finale masterfully resolve not only the story of Jimmy McGill, but also the story of the Breaking Bad universe as a whole.

In contrast with the action-packed opening of Breaking Bad, Better Call Saul’s first episode opens with a slow-paced, almost boring courtroom scene. It’s here we first meet Jimmy McGill (Bob Odenkirk), a struggling lawyer hopelessly defending three teenagers in a public defender role. The series’s opening episodes introduce the context of Jimmy’s situation, that he took up his low-paying lawyer gig only after he was denied a job as a lawyer at his brother’s  firm. Both Jimmy and the audience are under the impression that Jimmy’s rejection was the work of Howard Hamlin, Chuck McGill’s law partner. We later learn, however, that it was Chuck who prevented Jimmy from working at his firm. Better Call Saul depicts Jimmy as someone who desperately desires affection, and his brother’s rejection of him almost serves as a catalyst for Jimmy’s progressively unethical legal behavior. Kim Wexler (Rhea Seehorn), Jimmy’s girlfriend, plays an instrumental role throughout the series’s duration. She experiences her own falling out with Howard Hamlin and HHM (Howard and Chuck’s firm), and is at the center of many of Jimmy’s misdeeds. The entire plotline culminates in one of the series’s best episodes: Chicanery, which sees the virtual end of the relationship between Jimmy and Chuck.

The show’s early seasons also develop a cartel-driven plotline following Breaking Bad mainstays Mike Ehrmantraut, Gus Fring, and Hector Salamanca, while also introducing new characters such as Nacho Varga. Other than occasional crossovers with Jimmy, the storyline remains largely separate from the lawyer world. The lawyer plotline never really threatened the physical safety of its characters, whereas the cartel plot constantly puts its characters in harm’s way. When the two storylines eventually converged, BCS began to resemble its predecessor much more closely. The show’s closing seasons were intense, constantly making the audience fear for Jimmy, Kim, Mike, and Nacho. The introduction of Lalo Salamanca in late season four was another godsend for the series. Tony Dalton perfectly portrays a charismatic, yet cruel villain who terrorizes Jimmy and Kim in seasons five and six. In potentially the show’s most shocking moment, Lalo gruesomely murders Howard Hamlin in Kim’s condo. This moment conveyed how far the show had come, from a self-contained lawyer story into a larger plot about the Mexican drug cartel and Albuquerque’s criminal underworld.

The Jimmy/Saul we meet in Better Call Saul’s finale isn’t a character audiences are familiar with. It’s not Jimmy McGill, and it’s not Saul Goodman either. Instead, it’s Gene Takovic, a Cinabon manager who’s somewhere in between the honest Jimmy and the villainous Saul. Gene’s story takes place in a post-Breaking Bad world. Gene’s in hiding, Kim has left him, and the episodes are shot almost exclusively in black and white, resembling his emotional state at this point. In the build up to the show’s final episode, titled Saul Gone, Gene begins to resemble his Saul persona much more closely, creating a plan to scam rich people he meets at bars. When he learns one of his potential victims is a cancer patient, Saul and his partners begin to have second thoughts. Saul wishes to carry out the plot, rationalizing that people with cancer can still be bad, a call-back to his days representing Walter White. Saul goes through with the scam, though his partners stay behind. The mother of one of one of Saul’s accomplices, Marion, begins to look into Saul, learning of his past identity. The penultimate episode ends with Marion alerting the police of Saul’s whereabouts. During this scene, Saul has the opportunity to incapacitate Marion, but doesn’t, potentially offering viewers a glimpse of humanity remaining in the once-honest lawyer.

Saul Gone begins with a visit from a ghost of Jimmy’s present. Jimmy and Mike Ehrmantraut share a scene in the desert, taking place during the season five episode, Bagman. Jimmy asks Mike where he would go if he had a time machine. Mike responds, saying he would travel back to the date his son died, then revising his answer to the day he took his first bribe as a Philadelphia policeman. When asked the same question in response, Jimmy proclaims he’d travel back to the 1960s to invest in Berkshire Hathaway. Mike scoffs at Jimmy’s answer, bemoaning the idea of wasting the chance of a redo in favor of money. Later in the episode, we see a visit from a ghost of Jimmy’s future. We meet Walter White, bunking with Saul prior to the two going into hiding. Jimmy asks Walt the same question he asked Mike. Walt answers, claiming he’d venture back to his college days to remain a part of Gray Matter Technologies. Saul responds to Walt, saying he’d go back to his early con-man days to prevent a knee injury he suffered during a slip-and-fall scam. Walt responds coldly, remarking, “So you’ve always been this way.”

The episode proper opens with Saul on the run from the authorities. In a call back to an earlier episode, Saul is found by police in a garbage can. Saul appears defeated, solemnly calling his Cinnabon employees to let them know of their soon-to-be vacant manager position, before succumbing to a fit of mania. Saul, however, wasn’t finished, hatching up a plan. He calls Bill Oakley, a former colleague of Jimmy’s during his days of public defense, and convinces him to be his co-counsel. The scene following shows Saul and Bill negotiating with the prosecution. Saul’s crimes likely merit multiple life sentences, though Saul miraculously wiggles down the charges to an offer of just seven years behind bars. He even seems prepared to take the offer, until he learns that Kim Wexler came clean about her and Jimmy’s role in the murder of Howard Hamlin. Saul hatches a new plan, committing perjury to have Kim show up to his sentencing. It is there in the courtroom, in front of his ex-wife, he finally tells the truth. He owns up to his role in growing Walter White’s drug organization into the methamphetamine operation it became, destroying any chance he had of serving a poultry seven years. Saul also delivers a monologue dedicated to his later brother. He confesses to getting Chuck’s insurance pulled, something that indirectly led to his death. When the judge asked ‘Mr. Goodman’ to sit down, Saul triumphantly replies “The name’s McGill, I’m James McGill,” verbally announcing his redemption. We later flashback to a scene between Jimmy and his brother, during Jimmy’s early days as a lawyer. In this scene, we see a shot of H.G. Wells’s, The Time Machine, the apparent inspiration for the question Jimmy earlier asks both Mike and Walter.

Better Call Saul’s finale masterfully concluded a story 14-years in the making. The conclusion was a perfect way of having both Jimmy and Kim be properly punished for their crimes, but also redeem themselves through owning up to their actions. BCS’s final scene is shared between Jimmy and Kim in Jimmy’s Albuquerque prison. Kim uses her old bar license to see Jimmy one last time, and the two share a cigarette together, calling back to the show’s first ever episode. It is here we see the only shred of color in an episode otherwise shot entirely in black and white. The lighter Kim holds as she light’s Jimmy’s cigarette brandishes a colored flame. The flame itself signifies hope. Hope for Kim’s future, hope for Jimmy and Kim’s relationship, hope that they might see each other again. As the episode draws to a close, we see Kim look back at Jimmy from the prison’s exit, Jimmy looks on from the courtyard, and Kim exits, concluding two the greatest series of all time.