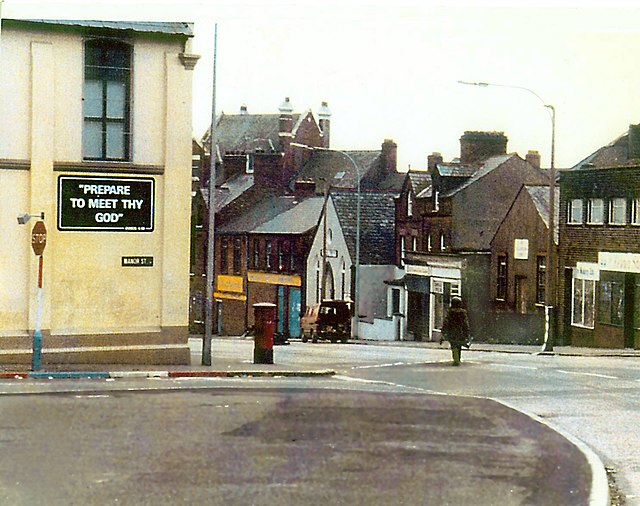 With the death of Queen Elizabeth in September, staff writers Eli Kernaghan and Ciaran Greer began examining one of the more forgotten parts of the United Kingdom: The conflicting interests between Ireland and Northern Ireland. In this piece, both writers will lay out their side of the story and their opinion about the continued division of Ireland. Does Ireland need to be unified and what does that imply? All will be covered in this article.

The case for unification by Eli Kernaghan:

According to the United States Census Bureau, about 1 in 10 Americans (over 30 million people) are of some line of Irish descent. I am one of the 30 million. While it’s nothing to really brag about, my interest in my Irish ancestry has always been a part of who I am. However a stain on Irish history is the ever-consistent presence of tyrannical British authority to this day. It would only be right if Americans with Irish ancestry unite together to take back the land which is rightfully the property of their ancestors. Here is why I believe Ireland should unite.

In the wake of King Henry VIII’s dismantling of the Catholic Church of England, the tyrannical ruler set his sights on the isles that lay just west of England’s shores. Although Ireland was once ruled  under the British, Henry VIII’s presence established a more permanent puppet government. For almost 800 years, Ireland has been under some form of British rule. In 1801, after Protestants had spent two centuries establishing themselves on the Emerald Isles, Ireland officially became a part of the United Kingdom through the Act of Union. This was the first major tyrannical act of the British in Ireland.

The Act of Union effectively ended the once self-governing Irish parliament. The British continued asserting their more Protestant views of both the church and governance. During the worst potato blight in Irish history the Gaelic language and culture began to decline. This was in part due to so many Irish people fleeing their homeland. It also didn’t help matters when the British created the national school system. The establishment of the national school system blending unneeded and unwanted Protestant and Presbyterian teachings into the school system and increased the rate in which Irish customs declined. After 120 years of oppression, Irish nationalists had had enough and decided to revolt, and the Irish revolutionary period began.

The 1910s were a breeding ground for the modern Irish unification movement. The Sinn Fein party (the democratic-socialist, unionist party of Ireland) began rallying support for a complete withdrawal of the British government from Irish affairs. Activists like Michael Collins led Irish nationalists in the streets and on the battlefields. Politicians like Arthur Griffith fought for their values through diplomacy. After numerous years of civil conflict, Ireland eventually partitioned into a northern Protestant state and a southern Catholic state.

The partition of Ireland and the continued British insistence of a Protestant, separated, loyalist state led to what is known as “The Troubles.” The Troubles were a series of conflicts that lasted around 30 years in Northern Ireland. The Troubles saw loyalists fighting against radical nationalists groups like the Irish Republican Army (IRA). The ‘Ra were a militant group that formed in response to the Derry protests of 1968 that ended with British police brutally beating hundreds of peaceful protesters. After 30 years of political in-fighting, numerous British crackdowns on protests (some that ended in bloodshed, please refer to Bloody Sunday), and the death of 3,600 Irish people, the Good Friday Agreement was signed. The Good Friday Agreement sought to end violence in Ireland and establish a balance between Catholics and Protestants in society.

My case for Irish unification is as follows: the monarchy in which Ireland was conquered and partitioned under is no longer valid, Northern Ireland is becoming more open to the idea of unification, and that the British government has oppressed the Catholic community in Ireland even when they are the majority. The expulsion of the British government would nullify the prejudices levied against the Catholic majority.

Point 1: With the death of the Queen, the monarchy has been questioned for both its need and its legitimacy. Many in Northern Ireland have begun voting for the now less radical but still pro-unification Sinn Fein party, according to recent Politico poll data. Sinn Fein party members are winning elections left and right in Northern Ireland, while the Democratic Unionist Party remains divided on its current party’s position. The monarchy has no power in these elections. The monarchy is only here to steal the taxpayer dollars of its Northern Irish loyalists. Why should Ireland and more specifically Irish voters continue voting in favor to stay loyal to a puppet monarchy?

Point 2: As mentioned above with the recent poll data, Northern Irish voters, especially younger ones, are becoming more accustomed to the idea of Irish unification. Northern Ireland isn’t exactly thriving economically. About 230,000 Northern Irish people live in poverty before housing costs. When the United Kingdom left the European Union in 2018, the fears of economic turmoil in Northern Ireland weren’t exactly alleviated. The “Northern Ireland Protocol” was created after Britain’s exit from the EU just so the Northern Ireland economy didn’t collapse from loss of trading revenue. Instead the British government decided to meddle in Northern Ireland’s business which threatened to kill off jobs and split Northern Ireland’s economy into a EU half and a British half. The protocol would hinder trade between Ireland and Northern Ireland, which has become a sign of unification between the two nations. If Ireland was too unify, they would have to eliminate soft trade borders in the country, stick with the EU’s trade deals instead of the British ones, and continue its appeal both politically and economically in the polls and finance reports.

Point 3: When the British took over ruling power in Ireland, they severely limited the role in which Catholics play in the country. Even now, Ireland is about 78% Catholic, and recent census data shows that for the first time, Catholics outnumber Protestants in Northern Ireland. A common misconception is that Catholics and Protestants are just fighting in Ireland for the sake of fighting. However it would be more accurate to say that Catholics in Ireland are responding to Protestant and more accurately British sponsored tyranny. During the Troubles, many Irish nationalists were protesting for the “One Man, One Vote” law to be passed in Northern Ireland. This would eliminate restrictions on Catholics voting that weren’t present when Protestants went to register to vote. Catholics in Northern Ireland were also less likely to move up in society due to a caste-system that disproportionately affected Catholic workers. If Ireland were to unify, the divisions across Catholic and Protestant lines, divisions perpetuated and at times encouraged by English officials, would subside. Protestants and Catholics wouldn’t be Protestants or Catholics, Unionists or Loyalists, Nationalists or Ulsters – they would simply be Irish.

Why Unificiation is not only unnecessary but unwanted by Ciarán Greer:

Oh Eli, with your classic romanticism with the Irish unification. It is so fitting for yet another tasteless American to swoop in with an angry dismissal of the crown and a fiery argument that not only should every Irishmen residing in Northern Ireland happily drop the borders, but that such a unification would go smoothly as a regular traffic bill in Parliament. However, in clear American fashion, Eli clearly has a thirst for an increase in the violence that has become the staple for the battle of unification by the uneducated nationalists.

But first, I must go back to the beginning and understand how Northern Ireland has changed and evolved throughout the history of its allegiance to the crown. The British Monarchy has evolved in its treatment of the commonwealth. The Commonwealth has changed over time, but as Eli detailed thoroughly, it has not always been that way. In 1922, centuries of fiery and at times violent treatment of people of Irish descent caused a war for independence between the Irish and the British. However, there is one key factor that would become the focal point of conflict over the next two years.

In 1922, most of Ireland seceded from the United Kingdom to become their own free state, but under the Anglo-Irish Treaty, six northeastern counties known as Northern Ireland remained in the Commonwealth. The Anglo-Irish treaty allowed for Northern Ireland to choose whether they wanted to join the Irish free state or remain within the monarchy. This choice was made quickly and effectively, as the Parliament of Northern Ireland decided that it was in the national interest to stay within the supervision of the English Crown. This would create an identity of their own and control the destiny of the entire timeline of Irish history.

Therefore, any notion of unifying the two completely different nations who have a history of violence whenever a whiff of unification is brought up, is an ignorant and horrible idea. Violence has been perpetrated in many ways throughout the nation since Ireland left the

It would be similar to a combination of two completely different American states and expecting them to forgo a singular government and their own personal identities for frankly no reason. Are the people of, for instance, North Carolina and Florida the same? If we follow Eli’s logic, then they would be forced to join the government just because they are on the same continent.

Northern Irish people have their own cultural practices, own Parliament, and their own history that is claimed by every single one of the 1.8 million people that reside in the nation. Forcing a move to unify with the south would not only deny the right of Northern Irish people to their own identity but create a conflict that is not only unwanted but unnecessary.