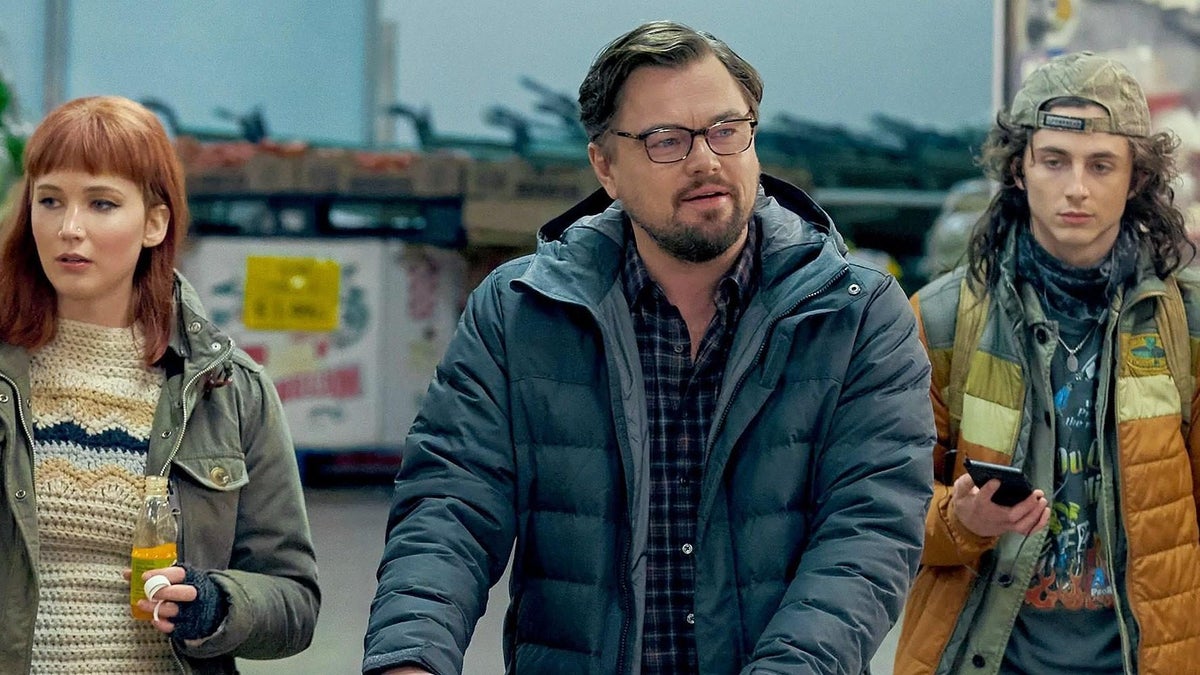 Review: ‘Don’t Look Up’ falls flat on its face

In its nearly 5 decades on air, Saturday Night Live’s impact on the entertainment industry is unparalleled. Serving as the starting point for numerous actors and comedians, the show innovated the sketch comedy genre and has served as inspiration for countless sitcoms, such as Tina Fey’s 30 Rock and Amy Poehler’s Parks and Rec.

But the director of Netflix original Don’t Look Up, Adam McKay, perhaps wears the SNL influence a little too heavily on his sleeve. This is of course not to say that the film, a dark “comedy” centering around a comet destined to make a deadly impact with Earth, borrows from the structure or style of the show. Rather, McKay simply seems to follow the SNL formula of getting as many big names as possible in a room together and hope that they make something funny, or at least something entertaining. And McKay most definitely got a lot of big names in a room together. Starring Leonardo DiCaprio, Jennifer Lawrence, Meryl Streep, Cate Blanchett, Ariana Grande, Timothee Chalamet,  Kid Cudi, and Jonah Hill, the movie has an unreal amount of starpower.

Did focusing on this raw starpower allow for some genuinely funny moments in Don’t Look Up? Sure. There’s definitely a handful of laughs here and there, and if McKay set out just to make a fun comedy that draws some cheap laughs, the film  would be considered a rousing success.

But unfortunately, Don’t Look Up takes itself a little more seriously than it should. Though inconsistencies in tone plague the film, McKay seems to have set out to make a satirical political  commentary about…a lot of things? Climate change, COVID, the political divide, phones, the list goes on. Basically, if one of your family members complained about it at Thanksgiving dinner, McKay takes a shot at critiquing it.

But, unfortunately, he does so with absolutely zero subtlety or nuance. The allegory of a comet representing the threat of climate change being strategically ignored by the corrupt media and politicians is unapologetically heavy handed, neither exorbitant enough to be particularly entertaining nor dialed-back enough to be clever.

And though the cast list of Don’t Look Up is absolutely loaded, poor character writing makes a lot of the performances fall a bit flat. Timothee Chalamet’s character felt like a bad Gen Z impression that would be featured in an out-of-touch SNL skit. Leonardo DiCaprio significantly over-acted for the majority of the film, like McKay was holding him at gunpoint telling him to act as nervous as humanly possible.

The major question I found myself asking at the end of the film was, “Who exactly is this for?” Those that agree with the incredibly broad, milquetoast politics of Don’t Look Up are being told that they are geniuses for realizing that climate change exists, and those that disagree get to be the butt of a really boring joke for 2 hours. Don’t let any Oscar hype fool you. Don’t Look Up is painfully mediocre.