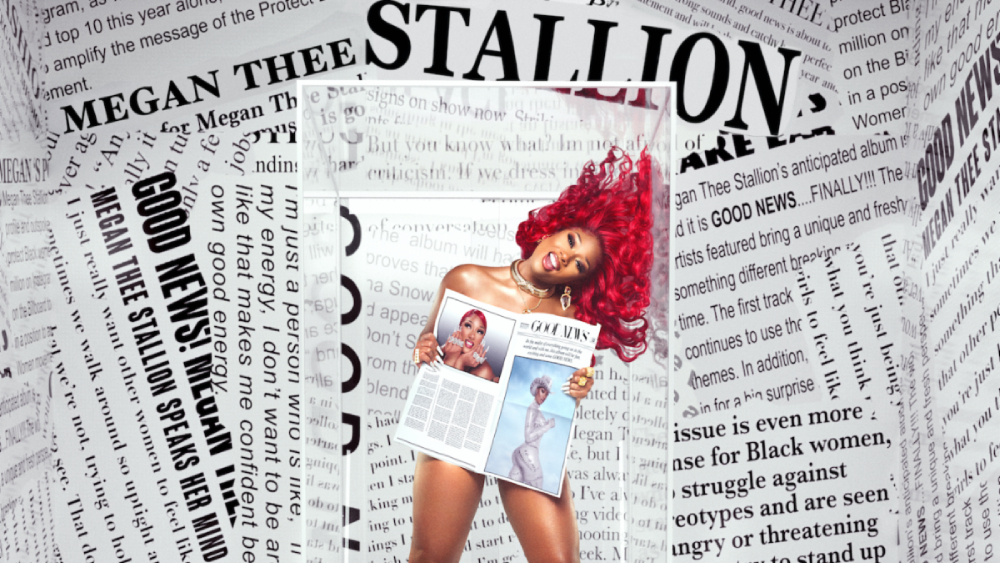 Megan the Stallion’s Good News and Misogyny on the Internet

3 words: Megan Thee Stallion. The new face of rap. Period. She has one of THE HARDEST flow games in the industry. I am a fanatic fan of hers, so of course, I wanted to review her. Especially since her first full-length album, Good News, was released this past year. I am here to review the album as a person of high intelligence in the area of female rappers.

Good News contains seventeen songs. Two of the songs [Savage ft. Beyoncé and Girls in the Hood] were previously released as singles. To organize these songs into categories, I have made this nifty chart. The best song from each category is bolded.

Now Megan might not have the most “deep” themes [One of the main criticisms against female rappers is that they “only sing about sex”. Of course, Megan is not disagreeing with that claim, but that doesn’t reduce her talent. So many male rappers rap ONLY about sex, as well, like 2Pac’s “Temptation”, Lil Wayne’s “Lollipop”, and Kanye West’s “Bound 2”, but don’t get the same hate and invalidation that female rappers, like Megan, get. This highlights the sexism in the rap industry and sexism around sexuality], like her contemporary artists of Beyoncé [Her most famous album is about her husband’s affair] and Kendrick Lamar [One of his most acclaimed albums, To Pimp A Butterfly, deals with materialism, racism, oppression, and self-love], but that’s not what she’s trying to achieve. Megan raps about these 3(ish) things and it’s entertaining. She can make SEVEN songs about sex all different and interesting. Here are the main ways Megan sets herself apart, despite her lack of deep lyrics:

My favorite example of this would be “Cry Baby’s” use of what sounds like a baby saying “dat dat dah” within the beat. Therefore, matching the name of the song and giving it some edge. And “Circle’s” and “Sugar Baby’s” synthetic heavy beat are upbeat to match Megan’s attitudes within the songs, about men’s repetitive behavior and wanting a man to pay for her, respectively.

Megan has some INGENIOUS lyrics. In “Sugar Baby”, the lyric “Thinkin’ that he Future, I’ma leave him in the past tense (Bye)” is an amazing bar. She takes Future’s, problematic track record with women [Future has eight children with eight different women] and implies that she will not be spending time on any man who wants to imitate his behavior. Genius. Another line from “Sugar Baby”, “He text askin’ what we are, I’m like, ‘LOL, I’m dead’,” despite being a basic rhyme, still delivers a very good roast with a nice amount of shock factor.

Okay, of course, I have to talk about the features on the album if BEYONCÉ is one of them. The non-singles on the album with the best features would be “Movie” ft. Lil Durk, “Cry Baby” ft. Dababy, and “Freaky Girls” ft. SZA. “Movie” is my controversial favorite. It really is a good song and I think that Lil Durk’s more nonchalant style of rapping creates contrast against Megan’s more passionate style. This clash is seen within the lyrics, as Megan raps about being a woman who doesn’t want to get with a man, rapped by Lil Dunk. “Cry Baby” does a great job doing the opposite of what “Movie” does. Dababy and Megan both have similar styles of rapping and they mix together very well. And in “Freaky Girls”, Megan does an incredible job of utilizing SZA’s more R&B style to create a beautifully mastered song.

Now to the “Other” category from my chart. “Shots Fired” might be the most complicated song on the album. It discusses the incident when Megan the Stallion was shot by Tory Lanez at a party. He is “accused of shooting Megan several times at her feet and wounding her” (BBC). Megan basically calls Tory a baby for shooting her in the song. Some of my favorite lines that display those emotions are “You shot a 5’10” b—- with a .22” and “Next n—- send a shot, I’ma sent it right back.” Megan takes this traumatic experience and creates a BANGER. Before the song came out, this event was HUGE in the world of the internet. When this event first occurred, there was a lot of confusion about the events that had transpired. Megan went on an instagram live to confirm that Tory Lanez did, in fact, shoot her. Almost everyone immediately gave Megan support and sympathy for the incident. HOWEVER, Megan was criticized by some, mainly men, for being “a snitch” and there are “more than two sides to every story.” These men were also going to Tory’s defense because they felt that this incident would affect his career. Now this is, obviously, a stupid opinion, but I am not a sexist man, so obviously, I do not understand. However, this feeling of sympathy is called himpathy, defined by Cornell Professor Kate Manne, as “the inappropriate and disproportionate sympathy powerful men often enjoy in cases of sexual assault, intimate partner violence, homicide, and other misogynistic behavior.” These men on the internet attacking Megan, despite her being the one who was attacked, display himpathy. There are SO many examples of himpathy on the internet [Some IRL context, the Brock Turner case displays signs of himpathy within the US Court system. Brock Turner raped an unconscious woman and was only sentenced to 6 months in prison AND then only went on to serve 3 of those months. This was because the judge had himpathy for Turner and was worried about his swimming career.].  So, now that you, know what himpathy is, let’s dig deeper.

Himpathy is rooted in the deep misogyny found on the internet. Women who present themselves on the internet are constantly belittled. It starts with small things. Take for instance an Instagram post that depicts a woman making an OBVIOUSLY satirical joke [I guess being misogynistic takes away from your ability to take a joke], that might not be the funniest, but hey! It’s a joke! And here are some of the comments under that post: 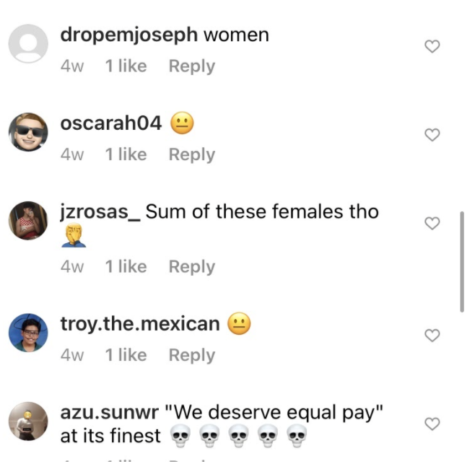 Disgusting, right? But this is just… the tip of the iceberg. One of the worst things that happens to women on the internet is slut-shaming [As a radical believer in equal rights, I have to discuss the slut-shaming that happens IRL (and online too, but it’s more realistically in person). Men who sleep around are seen as cool(!) and masculine. However, women who sleep around are sluts, whores, dirty, easy, and not “wife-worthy”. This idea is a disgusting, disgusting, disgusting, disgusting double standard against women. It’s the 21st century! People (GASP) have (NO) sex. And since we live within a heteronormative society, a lot of these interactions occur between a woman and a man, SO, duh women are having sex! Yet the attitude towards a man and woman who hooked up together is COMPLETELY different (once again, man=cool, woman=whore). Not only is this detrimental to women, but it also puts pressure on men that their self-worth and ability to be cool is found in their own sex life. This means that men who do not have as much sex feel less worthy.]. Hey guys, little fyi, you wear a bathing suit on the beach! So, when a girl posts a beach picture while wearing a bathing suit, she is not implying anything about her sex life. Like, how can what you are wearing [INCLUDING wearing NOTHING], imply your sexual history. Slut-shaming based on clothing also creates an opening for rape culture. If you think it is okay to shame a woman based on what she is wearing, it implies that you think is okay to touch her. WHICH IT IS NOT! AT ALL! No article of clothing [Or lack (once again)] implies consent [This is a really great example of what slut shamers think and the correct reaction]. The normalization of slut-shaming opens up any woman on the internet to be attacked for the way that she presents herself. Now, as established, the main slut shamers of women are men, but, women also slut-shame other women. So now that I have acknowledged both sides, it’s4 time to go into the “bad” men on the internet.

Incels. Incels are like the scum at the bottom of a barrel filled with trash, vomit, and coronavirus. One of the main events that cause a man to become an incel is rejection. They claim to be rejected by every woman ever, even the “bottom of the barrel women [who are] ugly and obese” (Shy Boys Documentary). The thing is, these men feel entitled to women and sex from women, so when they go into asking a girl out (with this entitlement), they will obviously get rejected [And rightfully rejected. Women (at least that I know) don’t like it when guys come up to them, asking for their body, and acting like it’s something they deserve. It! Is! Weird!].  These incels aren’t just losers who can’t get laid, they spend ALL of their time on the internet, very often, trolling women (This Is What The Life Of An Incel Looks Like). When these losers see women on the internet, embracing their own sexuality, and they see that they can’t have it [There’s that entitlement!], they comment disgusting things. These incels think that women belong in the kitchen, women should make [them] a sandwich, women aren’t funny, and of course, women are sluts. It becomes more sinister than that, as multiple cases of domestic terrorism committed by self-proclaimed incels [2014 Isla Vista killings by Elliott Rodger and the 2018 Toronto van attack by Alek Minassian. Rodger (self-proclaimed incel) killed 6 people and had a 107,000-word manifesto about his hatred of everyone that wasn’t a straight, white man (especially women!). Rodger drove a van into a crowd of people, killing 10. He identified as an incel on Facebook.], but since I’m discussing the internet, I’m going to steer clear from that. All these comments are, apparently, hilarious to men and they thoroughly love to troll women with comments like these. And, wouldn’t you know, Megan Thee Stallion is one of these women who is relentlessly trolled.

Being a female rapper is not easy, under any circumstance. As previously discussed, a lot of Megan’s songs are about sex. And, women who like sex or dress more sexy [Examples of Megan dressing sexy], are extremely shamed, especially by incels. Megan has to dodge all of the obstacles of misogyny on the internet to even exist on it in the first place, AND SHE DOES! She takes all the hatred against her and uses it as fuel to create powerful music, that elevates her as the best female rapper. Her ability to ignore the sexist oppression [And, realistically, racism against her] and still create makes Good News one of the best rap albums to be released in 2020 and I would recommend it to anyone who likes any type of rap music.