The Negative Effects of the Dairy Industry 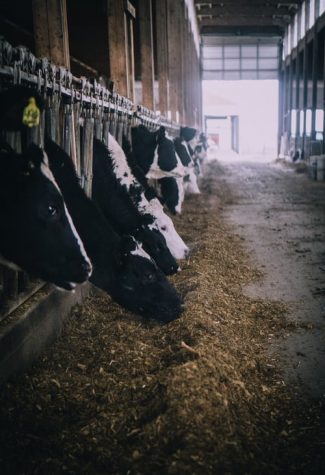 airy industry is embedded in a web of misinformation, much of it fabricated by dairy companies themselves, claims Sentient Media. Most of the information out there is paid for by these industries and altered to be biased in their favor, according to Sentient Media. When this data reaches social media, it explodes, spreading a false sense of security with the industry. For example, when news got out about Fairlife’s dairy farm scandal, it reached millions of people through instagram. Accepting such falsehoods in light of one’s own chosen narrative can be detrimental to the environment and the cows.

Cows living on dairy farms are not quite the same as cows we imagine. Most people expect cows to simply produce milk, as it is what cows do, but cows must be pregnant just like people before they are able to produce milk. From a very young age, female cows are forcefully kept pregnant in order to produce milk, and are slaughtered when they no longer can do so. The male cows are not kept much better. Soon after birth, according to Sentient Media, they are slaughtered for meat or sold to the bull sperm industry to be raised much cheaper. The United States of America, despite being seventh in the rank of dairy cow populations, produces the most liters of milk out of any country in the world, according to information gathered by the Compassion in World Farming organization in the UK. This proves that cows are pushed far past their limits to produce dairy for human consumption. Sentient Media gathered that the average milk production per farm increased twelvefold between 1970 and 2006, meaning cows had to produce about two times as much milk in their lifetime. Increased farm efficiency such as this increases cruelty.

In addition to the harm it has on the cows, the dairy industry also negatively affects the environment drastically. In the U.S. alone, water usage for dairy farms amounts to about 1,410,000,000 liters a day, which is a detrimental use of water, according to the Compassion in World Farming organization. Compoundly, it takes around 16,000 liters to produce one kilogram of beef, which adds up quickly when one considers how much beef is consumed worldwide each year, says Sentient Media. Bad manure handling can result in detriment for community water supplies, prairies, wetlands, and forests. Sentient Media also gathers that with over 9.4 million dairy cows in the U.S. alone, each producing over a ton of waste per day, said detriment is not difficult to imagine. Compoundly, dairy farms release toxic gasses such as ammonia dust, which can cause extreme damage to people, especially those who have respiratory illnesses.

There is much that can be done to solve the environmental and ethical dilemmas that are caused by the dairy industry. The most prominent and drastic measure one can adopt is veganism, but many people sway away from such a change in lifestyle because it seems so drastic. Aside from avoiding meats and dairy products altogether, one can actively avoid factory produced products and shop more locally. Decisions such as these can help reduce one’s carbon footprint, therefore forcing the dairy industry to fix its mistakes, both ethical and environmental.