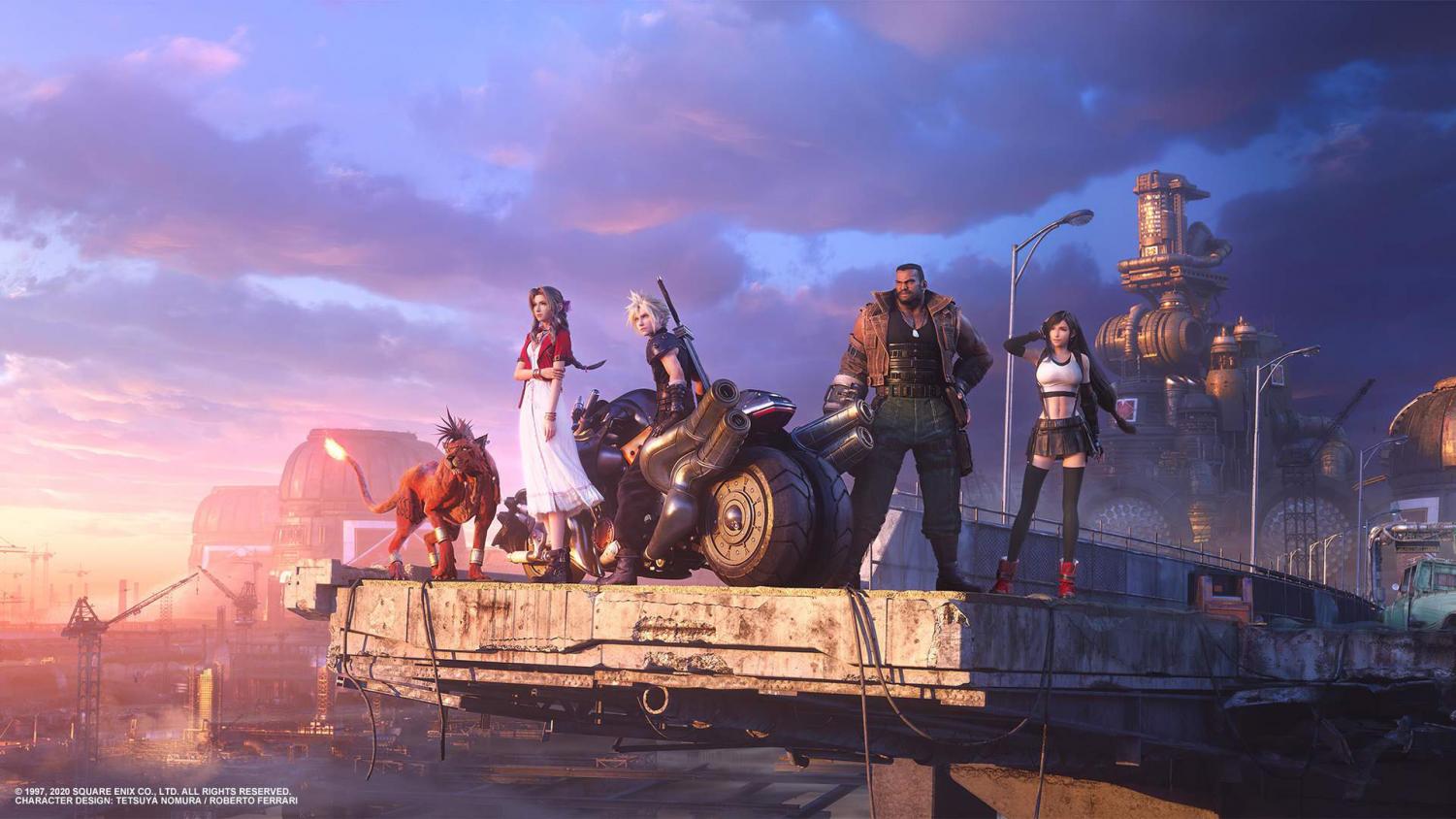 When Final Fantasy VII first released in 1997, it was one of the most technologically groundbreaking games ever made. It was extraordinarily ambitious, utilizing feature film quality 3D animation to move the story. And what a story it was. Even today, while other aspects of the game feel archaic, the story still stands out as dangerously engaging and devastatingly emotional. This was an amazingly cinematic story that was forced to be told through a 240p resolution with jagged and blocky character models. However, in 2020, technology has caught up with the needs of the developers, and this story can finally be told in the way it was always meant to. Enter Final Fantasy VII Remake.

The graphical difference between the original Final Fantasy VII and the remake is absolutely astounding. Not only were the original graphics updated, they were absolutely demolished. Watching the iconic opening in its new form was an absolutely magical experience for the first time, and by the time the main character Cloud jumped off the train, I was more than ready to experience what the rest of the game had in store. This game is quite possibly the best looking game I have ever played. With the exception of a select few minor characters, every single square inch of this game looks absolutely photo-realistic. It gave me a feeling that I can only imagine players felt in 1997. It made me feel like games will never be able to look better than this. The technological achievements in Remake are absolutely astounding, and I don’t even want to begin to imagine the disgusting amount of time and pure passion that was put into making this game look as good as possible. But it doesn’t even stop there, because they re-composed and re-recorded the vast majority of the soundtrack from the original game too. And they somehow made one of the standout parts of an already fantastic game even better. Instead of relying heavily on synthesizers as they needed to in the original, the new soundtrack is fully orchestrated, and it sounds epic in a way that’s nearly impossible to describe. Between the updated graphics and sound, the world of Final Fantasy VII feels more alive than ever.

With the presentation being a complete knockout, most would likely assume that the game is a guaranteed success. It seems like it would be so easy from that point onward, just retell the original story and everybody will be happy. Unfortunately, that’s not what happened. Even from before launch, there was one huge red flag that made many uneasy. Final Fantasy VII Remake does not actually cover the entire story of the original. Instead, it’s the first episode in a series of games that will eventually remake the entire story. This first episode ends as the main cast leaves Midgar (for those who haven’t played the original, that’s about 20% of the original game). That’s not to say that it’s light on content, far from it. After combining an astronomical amount of new story scenes and side missions, the game ends up taking about as long to complete as the entirety of the original game. And thankfully, most of this time isn’t wasted. It never feels like you’re only doing something so that they could turn a relatively minor section in the original into a full game. Many of the new story inclusions I feel only help to expand the world and its inhabitants. In particular, Biggs, Wedge, and Jessie all get significantly more character development, which helps their death near the end of the game feel even more impactful. However, not all of the new story inclusions are this appreciated. And unfortunately, the ones that fall flat for me and many others end up being the biggest.

I mentioned earlier how amazing it was to see the remade opening. When I first started playing Remake, I couldn’t wait to see more of my favorite story moments redone in the same style. I figured that even if I’d have to wait a few years for whenever the next episode comes out to see some of the best moments, it would end up being worth it in the end. However, after seeing the conclusion of this game, I’m starting to realize that the most important moments may not even happen. The ending of this game is absolutely bizarre, and not in a good way. It’s way too needlessly convoluted to explain, but the important part is that we know two things by the time the credits start rolling. First is that this series will not actually remake the original story of Final Fantasy VII, but instead tell a completely new alternate timeline reimagining. Second is that we can’t expect anything to go the way that it once did.

Part of me is really intrigued by the possibilities of a truly unpredictable story. In the original, moments like Aerith’s death were incredibly unexpected, and the sheer scope of Sephiroth’s power made you feel like you were going up against an unstoppable force. After losing a key cast member who was integral to both story and gameplay, nothing felt safe anymore. The presumed plot armor around all of these characters had vanished. While I went into Remake assuming that I knew what to expect, now I have no clue. That same fear that any one of my favorite characters could drop dead at any moment is back, and it’s exhilarating. Unfortunately, while I love the prospect of that, I can’t feel overly optimistic about these changes.

Aerith’s death is the turning point in which the story goes from good to absolutely incredible. In my opinion, it’s still the most realistic and tragic depiction of loss that I’ve ever seen in a game. Throughout the first half of the story, you as the player grow to rely on her and her special abilities. The game even forces you to use her in your party at a few different points. She felt just as much a part of the team as the main character. When she is suddenly ripped away, it’s devastating. That power which you as the player relied on is gone, and it’s irreplaceable. Sure, you can try to have someone else fill the role, but they’ll never feel the same. When it was announced that Final Fantasy VII was going to be remade, one of the first things that came to mind for many was how that scene was going to be handled. Unfortunately, now it’s looking like many of these moments aren’t going to be handled at all. I couldn’t imagine the original game continuing with Aerith alive, but the ending of this game makes it seem like that just might happen. I should reiterate that this is technically a new story, and so we don’t know how this is going to turn out. Maybe the new story won’t rely as heavily on a tragedy like that breaking apart the group, but that seems to be the direction that it wants to go in.

I don’t have a problem with this being a new story. Honestly, I think it could be a great idea if handled correctly. However, this wasn’t handled correctly. The marketing and even the very title of this game insisted that this was a remake when the final product ended up breaking that promise. I think that a lot of the backlash centered around this could have been fixed by one simple title change. If they had chosen to call the game Final Fantasy VII Reimagined, I think that a majority of the audience would have been far more accepting of the new story. But instead, fans were lead to believe that they were getting an updated version of what they’re already familiar with. When the actual game was anything but that, it’s not hard to see why so many people got so angry over this.

I should stress that I’m still very excited to play the upcoming Final Fantasy VII Remake: Episode II. The sheer amount of love that went into the first episode is astounding, and it resulted in a ridiculously fun game. It’s just a shame that this ridiculously fun game’s biggest flop was the strongest attribute of the original. If there’s one thing that would make this situation worse for me, it’s if Episode II sticks to the original plot anyway. If they do something similar to Star Wars: The Rise of Skywalker and reverse the controversial story changes in this game, I feel like that will have only wasted a potentially interesting opportunity. If they’re going to do this, they need to fully commit to it. They need to give us something that truly breaks the mold that the original set, not just dance around it for one episode and then give up. Although the story in Episode I gets stupidly complex and sets up a myriad of horrible possibilities for future episodes, I hope that Episode II can craft a story that has me hooked in the same way that the original did.