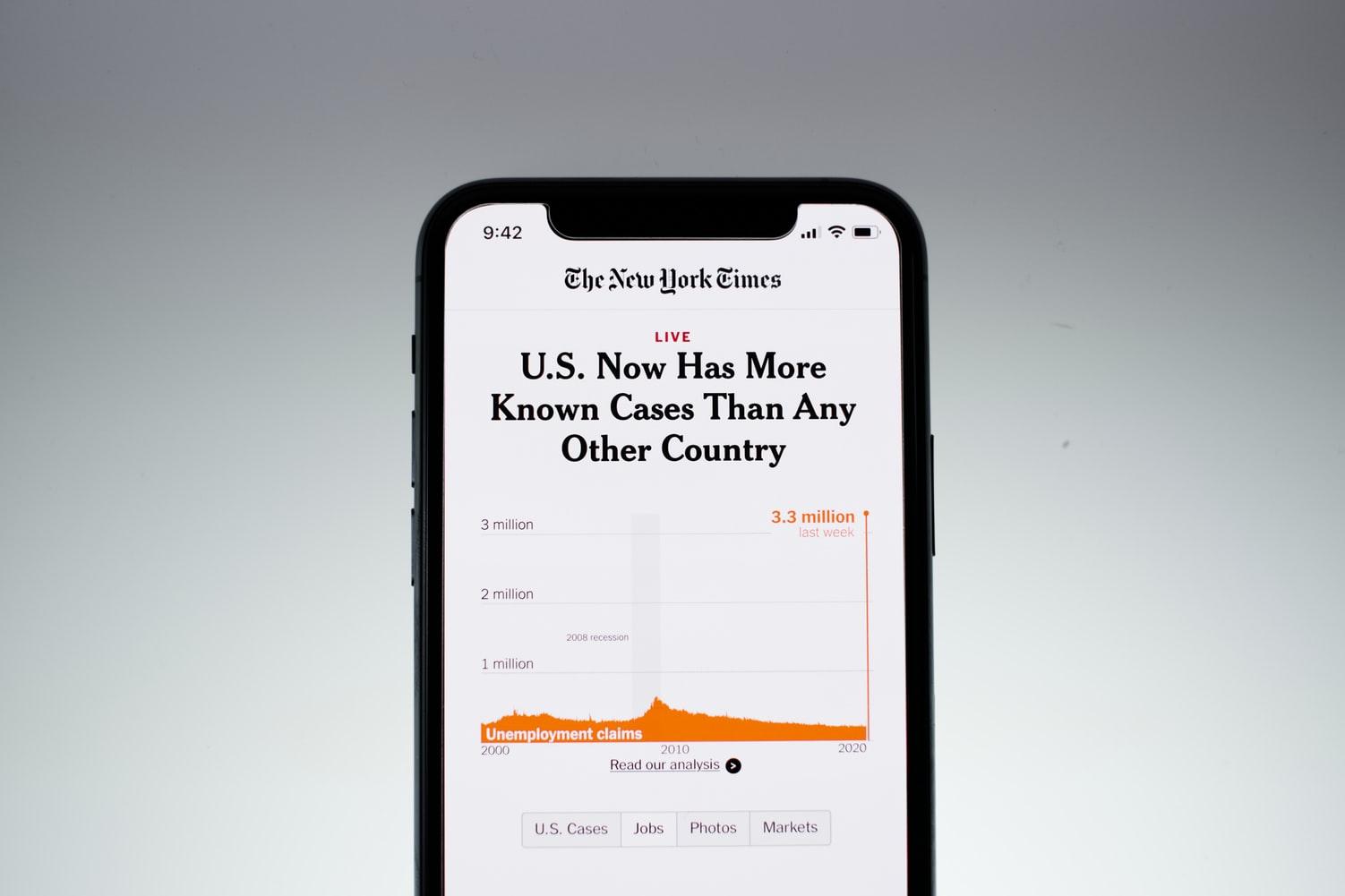 Instagram user “too_savage_for_democrats” is what inspired me to plug in my MacBook Air and begin furiously typing into a Google Document at 11:48 PM on a Tuesday. As I prepared to go to bed, I went in for (what I thought would be) my last Instagram scroll of the night. Directly after opening Instagram, my eyes were immediately graced with the latest post by  “too_savage_for_democrats” (or, as his 522,000 followers refer to him, Dylan). The post in question depicts a CNN article from this week, headlined, “Hundreds of journalists are being laid off, right when the public needs them most”. Just below the headline is a screengrab from an episode of “It’s Always Sunny in Philadelphia”, depicting two men mockingly crying, with the caption “Aww, is somebody non-essential?”

The meme itself is pretty surface-level, but that’s not the point. As I examine this Instagram post, an artifact that undoubtedly may be used as a source in a 2065 AP U.S. History essay prompt, regarding the “Fake News” phenomenon of the early 21st century, my first reaction is to inspect the comment section.

“It’s almost as if the world could survive without them”

“We absolutely don’t need journalists. They can rot in hell.”

“Wait, we need journalists? When was this??”

And, my personal favorite, “I’m happy about Fake News terrorist foot soldiers losing their ability to spread lies and fear.”

My first instinct, as a student journalist, was to defend the occupation. I type up a brief, well-written comment, with enough energy to sound enthused and enough apathy to avoid being labeled as a “triggered snowflake.” With my finger hovering over the “Post” button, I retreat. I realize that there isn’t an argument to be had in an Instagram comment section. Any valid points can be shut down with a simple “Ok boomer” or a “Well, that’s just your opinion.” So I delete my beautifully-composed comment and grab my computer. 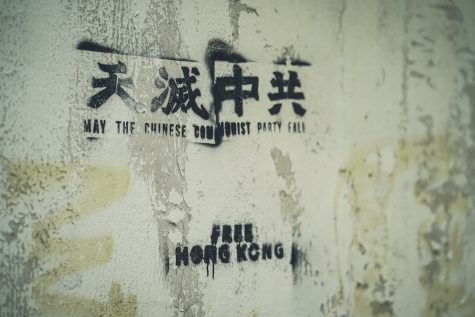 As CNN asserts in their headline, the media is an important part of a functioning society. We, as members of society, must differentiate, however, between “the media” and “The Media.” The former is a general outlet of communication responsible for information and knowledge. It is the primary communicator of all thoughts, ideas, and facts of the world. The latter is the mold into which the former has been morphed by our current society. “The Media” holds a negative connotation, as a corrupt perpetuator of lies and misinformation, a brutal attack force that holds the sole mission of manipulating the public into conforming to a specific pattern of ideology that polarizes and performs rather than investigating and informing.

While my position as a student journalist led me to instinctively defend the occupation of journalism, it would be irresponsible for me to operate under the assumption that media bias or “Fake News” didn’t exist. That’s an impossible claim to make, as it can be disproven with ease. I could say “Fake News doesn’t exist”, and you could log onto Twitter, tweet out a message like, “Alex Eastland thinks Fake News does exist,” and you have proven me wrong. 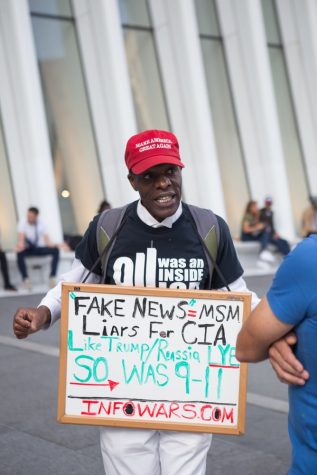 It would also be irresponsible for me to downplay the existence of political bias in journalism, as political views are far more reflective of our morality than we like to admit. The bizarre situation revolving around Ellen Degeneres and George W. Bush immediately comes to mind. In late 2019, LGBT icon and Hollywood staple Ellen Degeneres and Conservative hero George W. Bush were spotted sitting together at a Dallas Cowboys’ game, laughing, conversing, etc. For many, this was an unlikely, yet heartwarming bond that shows that we as a society can put aside our differences and enjoy watching the Cowboys make their way to another 7-9 season in peace. Others, however, felt betrayed by Degeneres. Those who respectfully disagree with Bush’s policies as President saw no issue, but those who believed that Bush committed war crimes and is a disgrace to American politics looked deeper than his economic philosophies. The outraged population didn’t view the political disparity as a petty disagreement, they viewed the divide between their side and the other side as one rooted in morality.

It’s a fair argument in many contexts. It makes us feel better to have political disagreements reach the conclusion of “you have your opinion, I have my opinion, we can co-exist in this world,” but the reality is, political issues are human issues. Policy written and passed in Washington has direct effects on the population of the United States. The major issues of our time– immigration reform, foreign policy in the Middle East, gun control legislation, etc.– are no light topics. One’s political views are a deep reflection of what one holds true to their heart. Removing political bias from journalism is one thing. Removing bias regarding what your heart holds to be fundamentally right or wrong is another. When a President says something that violates your fundamental moral code, is it possible to report on it, in good conscience, without bias seeping into its underlying message?

It is also important to denote that something can be biased as well as factual. In the American court system, those called to testify do not take an oath to be “factual.” They take an oath to tell the truth, the whole truth, and nothing but the truth. Reporting one half of a story can give a completely different spin than reporting the other half.

The protections of the media under the Constitution were granted in order to protect it from being attacked by the government. The greatest fears of our Founding Fathers included tyranny and State-run media. Today, however, the reverse seems to be true. The distrust of the press spurs from over-criticism of the government. What we are now seeing with the “Fake News” label is a legal silencing of the media. Unlike the situation in Hong Kong, censorship is not needed to undermine the press in America. All we need is Twitter. The President’s Twitter feed is perhaps the most personal, direct contact a President has had with the American people. In live time, whatever goes through Trump’s head is immediately, directly broadcast to every American citizen with Internet access. That includes tweets like this one:

The Fake News is working overtime. Just reported that, despite the tremendous success we are having with the economy & all things else, 91% of the Network News about me is negative (Fake). Why do we work so hard in working with the media when it is corrupt? Take away credentials?

Just as easily as I could have commented on the “too_savage_for_democrats” post, Trump has broadcast his opinion about the integrity of the press to millions of people. As a viewer of this tweet, it’s fun to believe. The message is clear: there is “tremendous success” and everybody who says otherwise is lying. To depict the media as, not just a bearer of bad news but as a falsifier of bad news is clever. It removes all guilt from the Trump Administration. If Trump is blamed for something, it’s “fake news” lies. If he’s not given credit for something, it’s “fake news” lies. It’s this message that remains with the commenters on accounts like “too_savage_for_democrats”. The media has been made the enemy, and viewed as, in a time where this label holds significant meaning, “non-essential”.

The bottom line is that the villainization of the media is dangerous. Media bias exists. It always has, it always will. But by villainizing the press, we are finding ourselves on the extreme of a horseshoe theory, where we, the people, are silencing an important foundation in democracy, without an authoritative regime even silencing it for us. For those looking to dismiss the press during this crisis, I want you to examine why I am currently on Day 14 of quarantine, writing this at what is now 1:07 AM on a Wednesday. The Coronavirus crisis is a product of misinformation. Cover-ups by the Communist government of China allowed us to under-estimate the severity of the virus. Even when arriving in the United States, the misconception of it simply “being a bad flu” floated for weeks. As I am writing this, nearly 1,000,000 people have contracted the Coronavirus, 22% of which are Americans. The press is not a foundation of society that we should take for granted. It is times like this where knowledge truly is power, and the spread of knowledge could save lives.