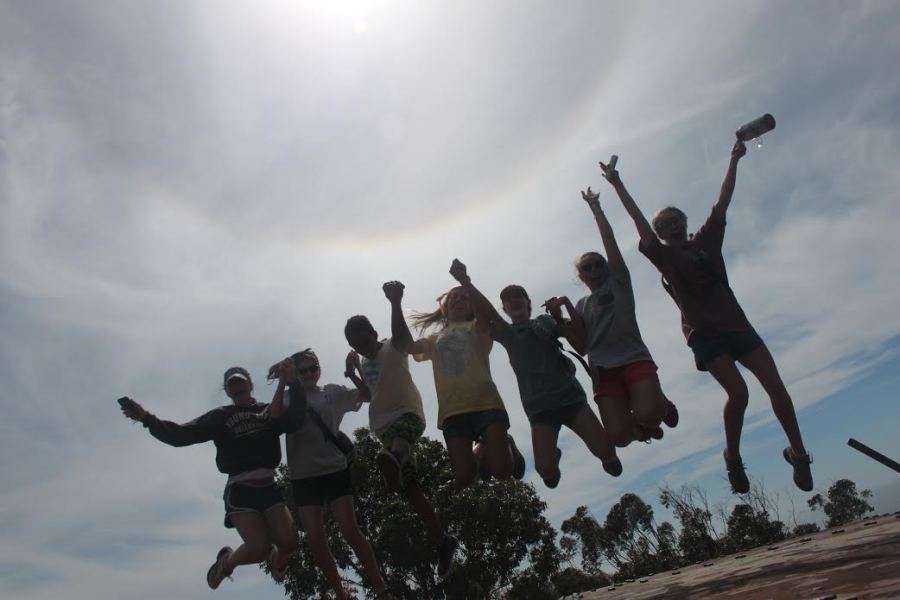 It seems like everyone and their mother’s hairdresser has visited a country that isn’t their own. I was not a part of that group until recently. All my life, I had hoped and prayed that I would have the opportunity to see Big Ben or eat near the Coliseum. Most people’s first country they have been to outside of America has a culture that is similar their own. This was not the case for me. In late February, I embarked on a ten day trip to South Africa with some of my closest friends and some classmates that I didn’t really know. Thirty hours, four movies, and three airports later we arrived at Apostle Battery, a former military base during WWII in Cape Town, South Africa. Consumed by exhaustion, we walked into our dorm and fell asleep.

The next day, we were greeted by the JAM Team, a group of men and women of all ages who have either dedicated their lives or a year of their lives to serving God and helping those in need in different townships in South Africa. During our first meeting, the leaders of JAM explained to us that after Apartheid, people were living in poverty because they had been oppressed for so many years that they were unable to get out of the poverty and townships that they had lived in. This issue is still a reality today and is why JAM goes to different townships that are filled with gangs, drugs, and violence and try to fill them with the love of Christ.

During our first weekend, girls and boys from a township called IY came to stay with us. We were all startled by how loud they were and how beautiful their singing voices were. That first night, there was a huge language and culture barrier between us. But during the next couple days, we went through obstacle courses, walked the mile down to the beach, and found God in the Tabernacle. The Tabernacle was a five stage journey that allowed us to build our relationship with God and gave us the opportunity to confess our sins and be completely open with him. By the time I finished the journey, I had tear stains on my cheeks and a heart that had been refilled with the Holy Spirit.

After we said our goodbyes to our new friends after the weekend together, we spent our Sunday afternoon at the beach, on a hike, or exploring Apostle Battery. My friends and I were given a tour of Apostle Battery by one of the JAM Year members. We got to climb up another canon from which we could see Robben Island, a prison that was Nelson Mandela’s torcherous home for eighteen years. That night, we went to a youth service in downtown Cape Town. We sang songs not only in English but also in Afrikaans. As we sang, I looked around and saw all of these teenagers my age who were really moved by the music and meant every word that they were singing . The songs were sung with a live band and were more contemporary than what many of us were used to, but by the end of the night, we felt the connection they felt with God. At the end of the service, we got to meet some of the teens from the service who go on outreaches like us. Afterwards we ate ice cream and prayed together. Then we got onto the cars and went back to the camp site.

The next day, we drove to IY and spent our morning at one of the Christian preschools called Little Lambs. After a morning full of songs, the story of Noah’s Ark, and running around the park, we spent the afternoon at the harbor where we shopped at the market and ate fish and chips. At the market, there was everything from signs to paintings to wooden animals. By the time we left to go back to the house, I had a sculpture of a family, jewelry for my friends back home, and a delicious ice cream cone in my possession.

On Tuesday, we embarked on a five hour drive to Garden Route Game Lodge, a safari resort. By the time we arrived at the resort, we were all drenched in sweat from our air-condition free ride. We didn’t know at the time that we were experiencing the hottest day South Africa had seen in 100 years. It was a sweltering 110 degrees! Once we got our bags from the cars, we were given our keys and told that we had two hours of free time to swim, sleep, or shop. My friends and I ran to our huts so we could spend as much time as we could at the pool.

The first thing we saw was a herd of zebras running up a hill. Seeing these zebras made our energy-drained bodies instantly filled with excitement. We spent the next two hours cooling off by the pool and drinking chocolate milkshakes. By the time we were refreshed, it was time to go on the safari. We all hopped into the buggies and embarked on our two hour journey through the homes of elephants, lions, rhinos, kudu, giraffes, ostriches and many other animals.

Our tour guide, Ashlee, told us that many of the animals we saw were in danger of extinction like lions and rhinos. As we drove, the sun illuminated the animals and the landscape, showing everyone not only how beautiful it is but also how much we need to make sure these animals will be around for future generations to see. As day turned into night, we went to dinner where they served exotic foods like kudu, ostrich and hake but still had favorites like beef, nutella, and mashed potatoes. The next morning we continued on our safari, went to see the snakes, and said our goodbyes to the animals as we went back to Cape Town.

We spent the next two days going to Little Lambs in the morning. By the end of our time there, we knew that not only had we made an impact on the children, but that they had also made a lasting impact on us. On Thursday night, we went to IY to talk to the teens who had stayed with us the previous weekend. They told us that they felt closer to God since they left camp but that it had been hard for them because so many of their elders either don’t approve of their beliefs or tried to get them to do the wrong thing. One of the girls also showed us the school she attends. She told us that the name of their school means “we are the future”. She told us that everyday they are reminded that they can make a positive influence in their community. She said that she reminds herself of that whenever someone tells her that drugs will make her life better. It is what keeps her clean.

The last night we were in Cape Town, we had a Braii, or an outdoor BBQ. We sat in circles and reminisced over the great times we had together. As people started to pack up their things, my friends and I decided to spend our last night in our Eno hammocks. Throughout the trip, we would spend our free time hanging in the trees while sharing stories and laughs, making us closer than when we arrived ten days before. The next morning we packed up our things and went to the market one last time. After we made our last minute purchases, we said our goodbyes to the JAM Team. We packed the cars up and drove toward the airport, sniffling the whole way there. Thirty-one hours later, we arrived safely in Greenville and were greeted by our families.

Looking back on the trip, I have realized not only how much of an impact we made on South Africa but also how much the people we came in contact ww lucky I am to be born where I am and also where I go to school. Seeing how happy the kids were in IY, a place that is filled with poverty, made me appreciate everything that I have and count every day as a blessing. I also made new friends not only from South Africa but also from here at CCES. Before going on this trip, I was skeptical about how it would impact me or if it was even worth it but now I know that that trip changed me in the best way possible. It brought me closer to God and sparked a fire inside of me to help those in need.