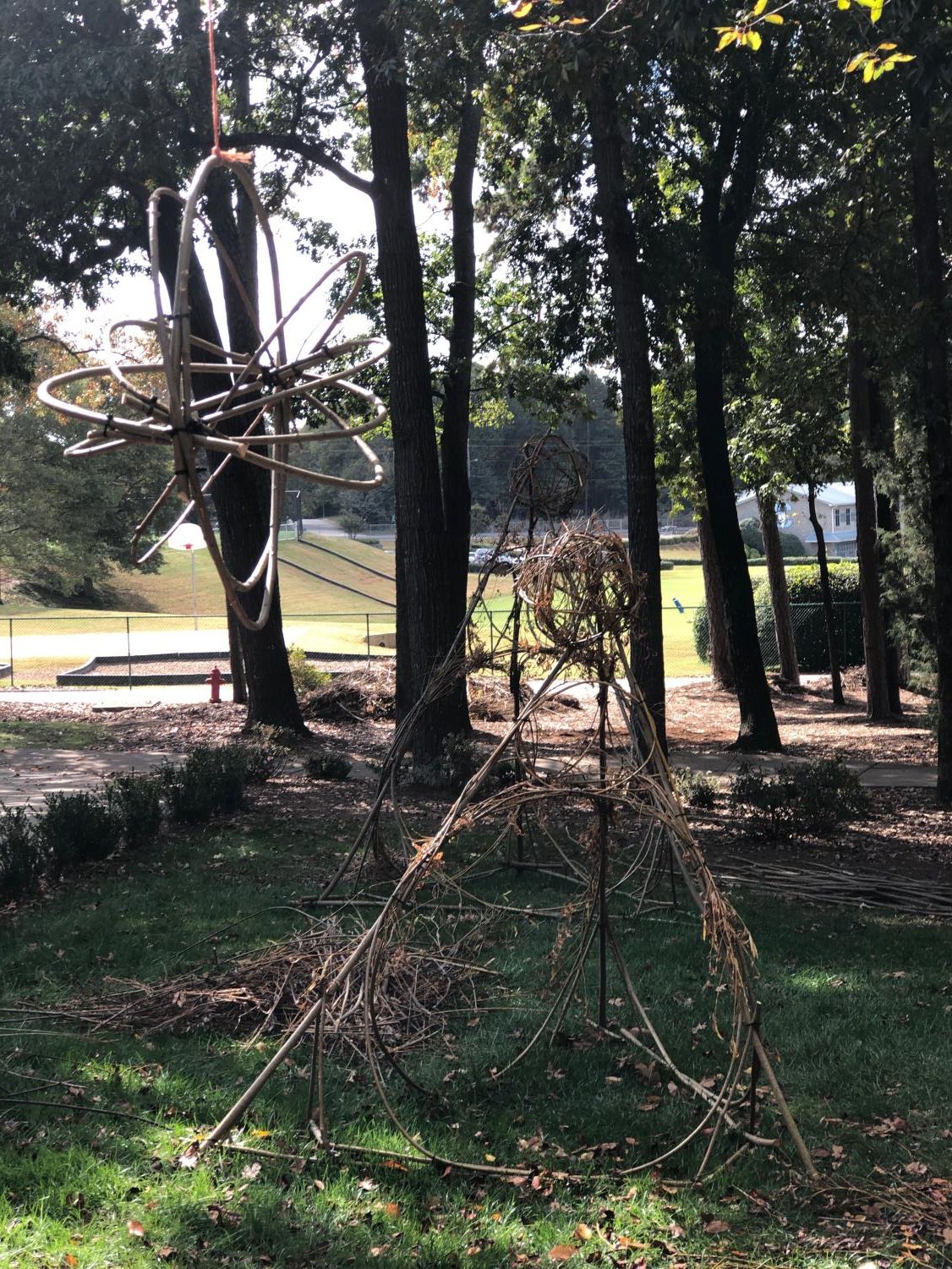 Patrick Dougherty, an artist raised and based in North Carolina, has studied art history and sculpture, achieved a B. A. in English from the University of North Carolina, and earned a M. A. in Hospital and Health Administration from the University of Iowa. He combines his diverse passions through his craft, fusing carpentry with nature in an exploration of primitive construction methods. His earliest pieces consisted of single works in conventional galleries, and his works rapidly escalated to gargantuan-scale ecosystem displays, enhancing his values and wielding intrinsic beauty to the manmade. He has created over 300 environmental sculptures over the past four decades, utilizing truckloads of saplings for each piece, with his creations being exhibited in an array of nations worldwide, such as Scotland, Brussels, Japan, and, of course, the United States, with his latest production being featured on campus at Christ Church.
Dougherty has received a myriad of recognitions and awards for his landscape pieces, such as the North Carolina Artists Fellowship Award, the 2011 Factor Prize for Southern Art, the Pollock-Krasner Foundation Grant, the Japan-US Creative Arts Fellowship, the Henry Moore Foundation Fellowship, and the National Endowment for the Arts Fellowship. In 2009, the Princeton Architectural Press even published a successful novel focused on Dougherty and his artworks.
Each of Dougherty’s installations are individual and specific to the surrounding area, allowing him to create a series of intricate and personal pieces across the globe. He is inspired by the childish ambition that accompanies discovery, exploring the North Carolinian forests through every work, weaving twigs and branches together to construct visually interesting and surreal sculptures that defy the limitations of reality while also possessing an innate palpability, forging a connection between man and earth.
Saplings provide the base on which to build, and zip ties hold the structures together and offer support, allowing them to maintain their shape. Doughtery states that his works will last for approximately two years after their completion, meaning that CCES’s landscape pieces will truly become a part of our campus and can be enjoyed for several semesters.
Dougherty’s on campus-pieces adorn three separate regions of Christ Church, with one being displayed in front of the Upper School, one in between the Middle and Lower School, and one between the Lower School and gym. Dougherty and his son Sam mainly focus their efforts on the work in the campus center, which is visible from the Middle and Lower Schools, PAC, and chapel. This sculpture is currently the tallest of the three, with twisted branches and foliage amalgamating to create a truly complex work. Separate segments featuring passageways and windows allow for an interactive experience. The Upper School sculpture pulls inspiration from his techniques but possesses a greater degree of student involvement, with Upper School art classes solely participating in the design and construction of the piece. Mrs. Kimmell and Ms. Teal have been guiding their classes to construct a unified work, utilizing foliage and branches to experiment and produce a fluent structure. The final sculpture behind the Lower School was fundamentally erected by Doughtrey but was completed by Lower School students and is the shortest of the structures. Its small height allows younger students to engage with the piece, with the multiple entrances and windows/ roof openings giving it a tunnel-like, whimsical feel that encourages exploration.
Mrs. Kimmell shared that students collectively conceptualized the Upper School piece, each creating different sketches, and that elements were gathered across the concepts to establish the finalized design. The students were inexperienced with the medium and had received no guidance aside from that of the Upper School art teachers. Weather and height have been the main challenges that the classes have faced in their pursuits, as they are building an upward structure along a slope without access to scaffolding. Mrs. Kimmell has described the process as equally “challenging” and “inspiring”, and feels that the artwork had been about “making mistakes alongside discoveries and learning that a single stick can become anything”. She has been highly impressed by the effort and enthusiasm for the project amongst her students and is proud of their work ethic, positivity, and passion.
Doughtery’s installations are powerful and stimulating structures that truly elevate Christ Church’s values of unity and innovation, with students and volunteers across grade levels contributing to the construction. Though they may only stand for a few years, the impacts of these sculptures on our campus will be meaningful and long-lasting, inspiring students across all divisions and uplifting the innate curiosity that accompanies man’s connection with Earth.