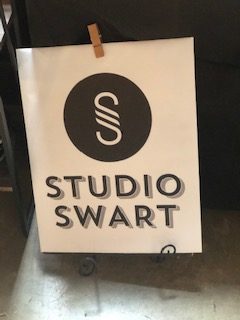 Studio Swart: How to Have a Mindset that Sculpts Success

On September 25th and 26th, the Vintage Fall Fest was held in a quaint little farm in Greer. Dozens of artisans and vendors flocked to the fields, where the candle-scented stalls and homey aromas of apple cider waltzed on the cool fall air. Trinkets, decor. antiques and everything one could possibly want from a fall festival was packed into the venue. And smack dab in the middle of the show was a potter who, like so many around her, kept her self-made business afloat during an economic recession – and made a huge comeback. Meet Kaitlin Swart, owner of Studio Swart.

On her table lay the most exquisite creations I’d ever seen. Carefully sculpted coffee mugs, expertly formed soap dishes, and all kinds of exquisite vases were clustered together in a cheerful display. Each one was unique, crafted for countless hours on end until a beautiful product was formed. I purchased a mug from her “Woodland” Collection, while my mother and sister bought various dishes and pots. 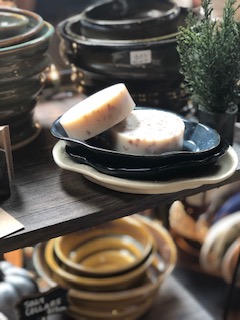 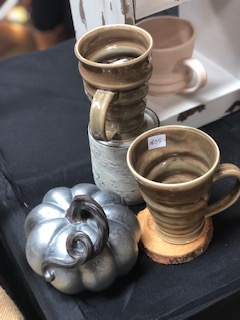 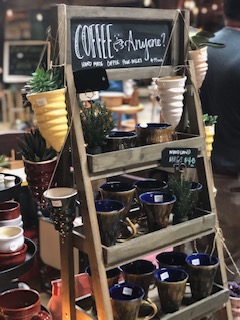 Though this description paints a rosy picture, it took a lot of hard work and trial and error for Kaitlin to get where she is now. Like any self-made entrepreneur, she had to start from square one. At six, she made her first coil pot, and the spark of creativity was ignited. At thirteen, an introductory ceramics class added fuel to her dream. At nineteen, she bought her first pottery wheel, and it only went uphill from there.

Like many of us, Kaitlin has struggled with finding her purpose in life. For a long time, she worked in an office setting, which she dreaded because she had no creative outlet. She found her purpose in pottery through her faith. “I believe God makes each person with a unique set of skills and talents. He wants to use them in unique ways to reach others and share the gospel of Christ through them. I believe my most important step was realizing this “dream” of owning a pottery studio was God’s way of wanting to use the skills He gave me to reach others and share His love with those around me,” she said.

Her enjoyment in creating peaks when she’s throwing a lump of clay on the wheel. She doesn’t know how it will turn out, because even though she has a specific process, there is “no guarantee” that the project will go as planned. “Sometimes”, she said, “this works out for the better, and sometimes it turns out in disaster!” The main culprit of failed projects is her kiln, oftentimes in the form of glazed projects fusing with the kiln shelves. Other common problems such as air bubbles forming – which can cause the artwork to explode – can drastically alter her original vision for a piece. At the end of the day, however, Kaitlin is satisfied with her work and the creative freedom she gets from her career.

As for the business component, she didn’t quite have things figured out from the get-go. Re-adjusting her mindset on what the “perfect business” would be for her was crucial to her growth as an entrepreneur, and this has been the key to her success. “I would say being flexible, and willing to work hard (and long!) has been my mantra,” she said. If there’s one piece of advice Kaitlin could give to a new entrepreneur, it would be to simply get started and not worry about having everything perfect at the outset.

Clearly, uncertainty is an ever-present factor in pottery, entrepreneurship, and just business in general, and the surgence of COVID-19 took it to the next level. Because her business is mostly built on selling goods in-person at markets and teaching others to craft their own pottery, income in those areas was few and far between. A new strategy was needed to keep the studio afloat. When asked about her approach to revamping her business, she replied: “This was challenging for sure, but it forced me to ramp up my online Etsy shop, and advertise differently. I know I have grown stronger as a business because of this.”  (You can access her Etsy shop on her website, which will be linked down below.)

Returning to the conversation of the market, Kaitlin rejoices at the turnout (bountiful), the artwork (inspired), and uplifted spirits of everyone around her, saying, “Customers were supportive, chatty and friendly – it was great to see such a boost of morale in our community”. According to Kaitlin (and several of the vendors I talked to at the festival), it was a badly needed celebration of art and togetherness, a time where we could all see each other’s faces for the first time in months and get back to some kind of “normalcy”. It’s clear that people wanted to support the dreams of these artisans, and it made for a lively and happy atmosphere.

If there’s one thing we can all learn from Kaitlin, it’s that you don’t have to have everything planned in order to become a success. Life will throw its challenges at you, and you will have to adapt, but having a comeback is far from impossible.

If you would like to support Katlin’s business, you can go downtown to Studio Swart  at 118 Knollview Drive, or check out her website at https://www.studioswart.com/ .